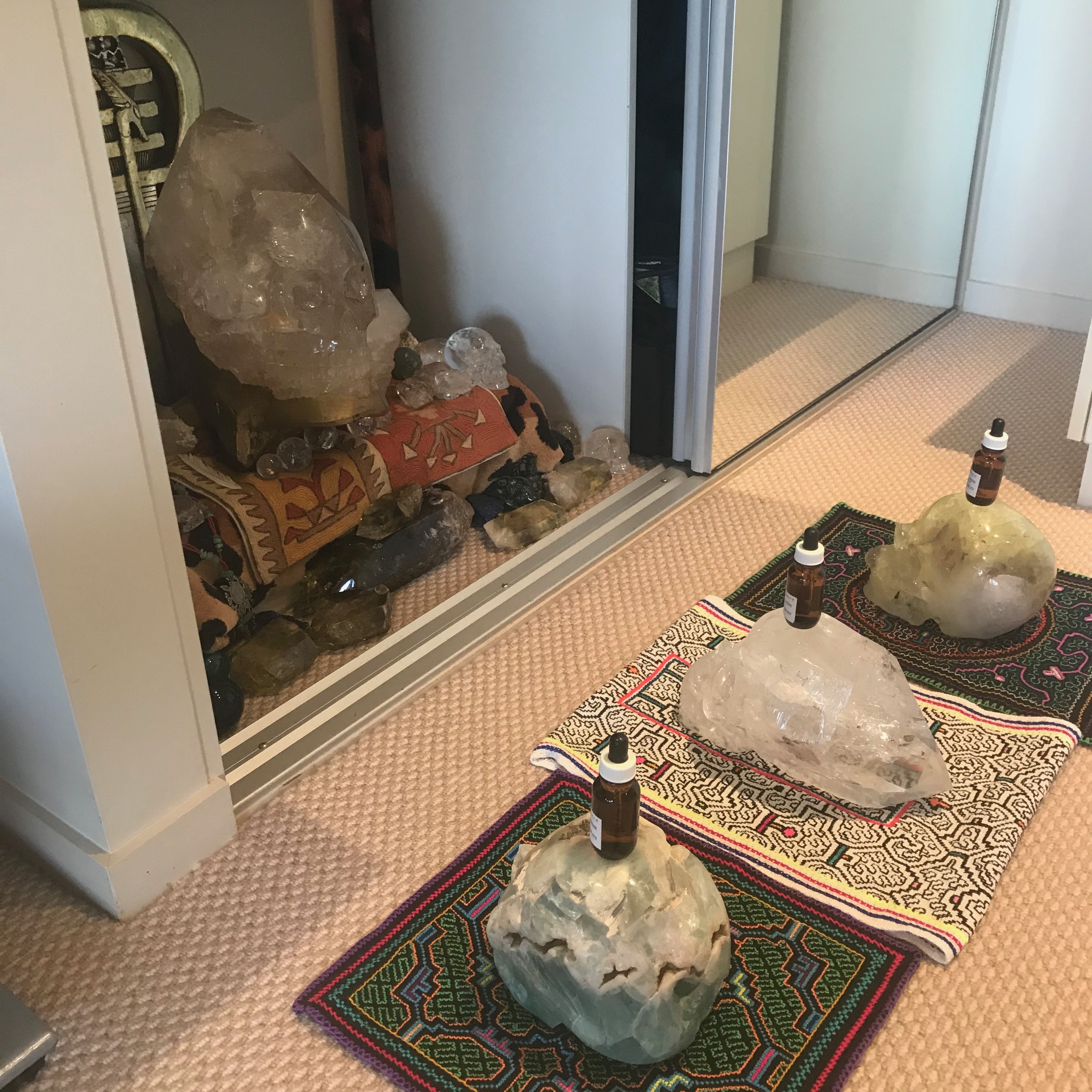 November 11th was an 11.11 portal. A few days before, when I sat in meditation with soul sister Jennifer Starlight surrounded by four of my most powerful Crystal Skulls – The Master Skull Solar, Teanna, Grestano Ancient One of the Light, and Balthazar – a message came through that on the day of the upcoming 11.11 portal, I was to make a vibrational essence with the assistance of these four Light Beings. The influx of cosmic energies downloaded through the crystal skulls would I was told, be amplified by their unique qualities, to create a mother essence called ‘Trinity’. 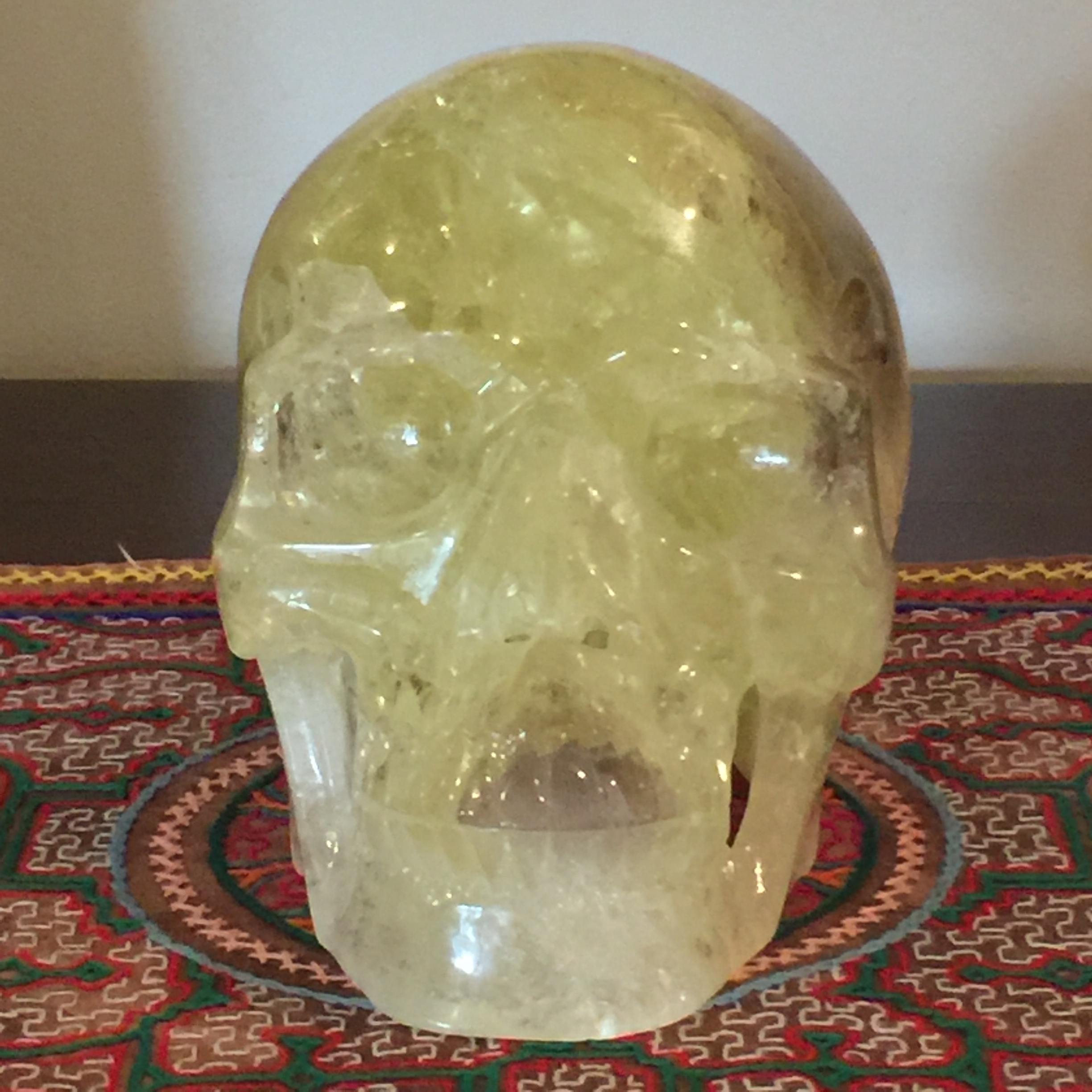 Balthazar who is carved from a beautiful natural golden Citrine, calls himself ‘The Meridian Man’. He activates and opens the crystalline consciousness of the meridians of our body, where we hold our deepest trauma and shock, in order to realign us with the crystal meridians of the Earth. 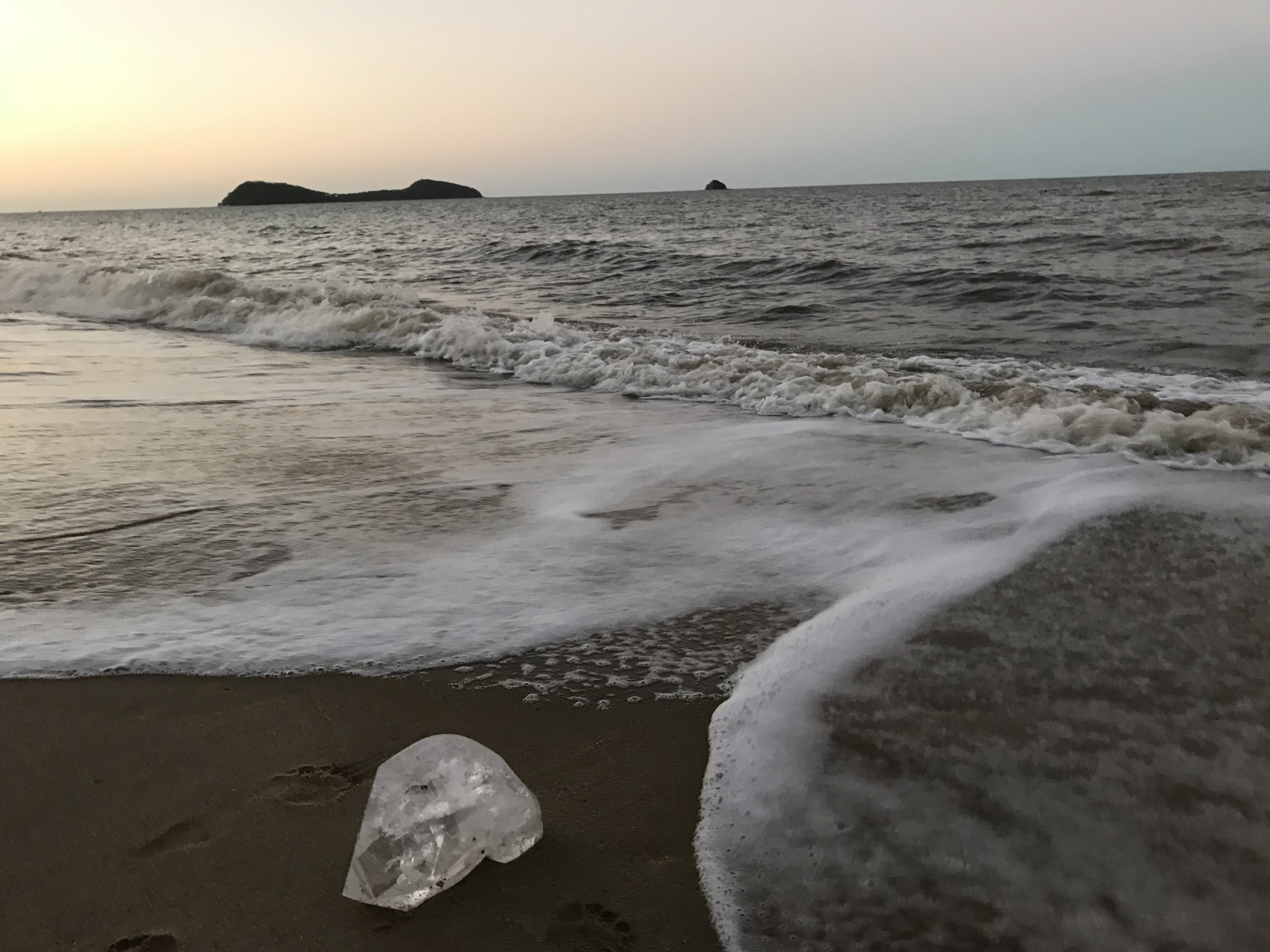 Teanna was orignially named ‘Sorrow’. When we first met in Arizona, she opened a huge well of sorrow within me that I knew could not all be mine. I realised that she had come to help humanity release their deepest grief and their deepest sorrow, which in some cases, people may have been carrying with them through lifetimes.

In 2017, after an incredible ceremony at an ancient Royal site in Ireland, ‘Sorrow’ made it know that her name going forward, was to be ‘Teanna’. This crystal skull’s incredibly pure, lazer energy cuts through the darkest of shadow, to amplify the Light within you.

Grestano Ancient One of the Light  – The Anchor 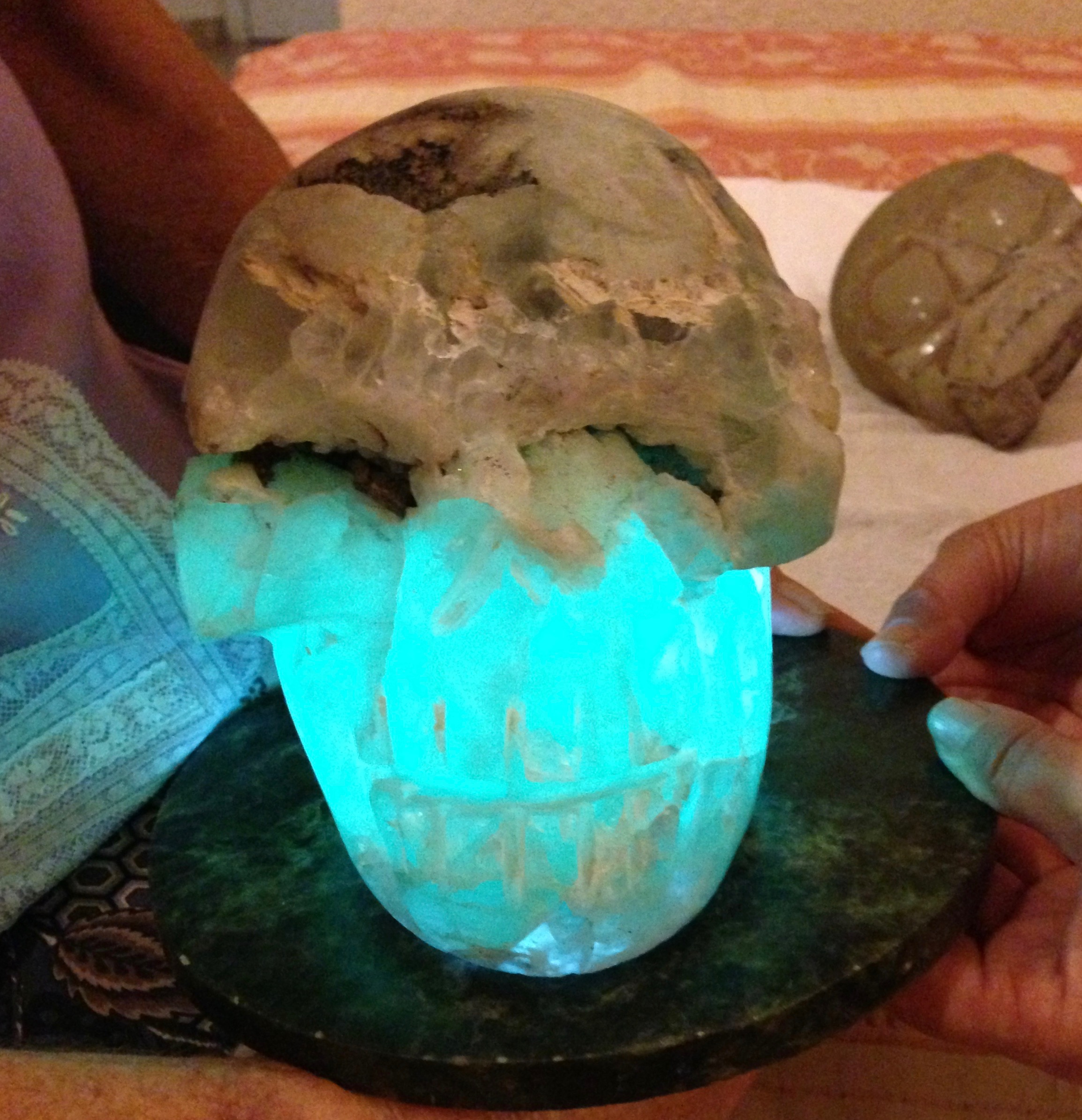 When Grestano and I came together in Mexico, he delivered a powerful message to me.

“I am Grestano, Ancient One of the Light. I was here eons ago when this planet was first being seeded, and I assisted with that. I come back now to assist with the reconstruction of the Light Grids, so that the Planet can lift to new dimensions of Light. I have been waiting for you.”

Grestano is here to help rebalance the physical leylines of the Earth, as well as the energetic and etheric Light Grids surrounding it.

Solar – The Overseer and Witness 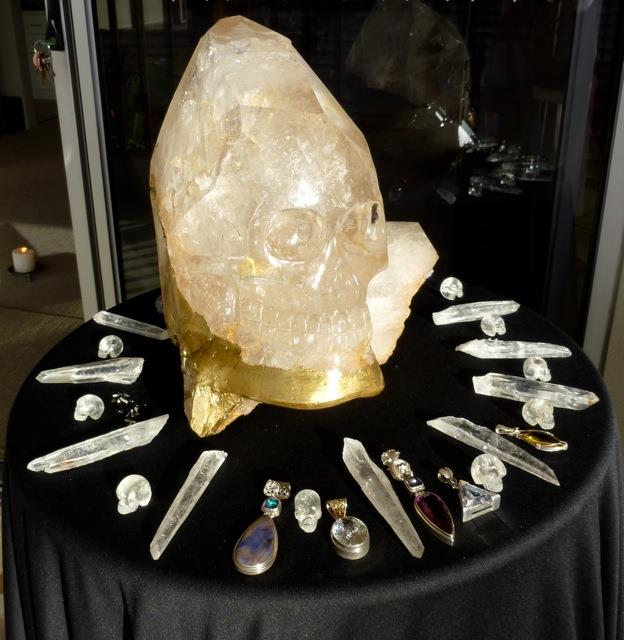 ‘The Master Skull Solar’ has demonstrated beyond doubt, that he is the conduit of information and energy from the Higher realms. He is I believe, a dimensional doorway. I have been told that there are twelve Councils of Light who work with and through him, to assist the earth plane. I have been deeply touched to witness the impact ‘Solar’ has made on the lives of others. In many cases this impact has come through people merely seeing his image. I have also watched with awe, the extraordinary visual Light phenomena demonstrated in photographs taken of him, particularly when we are working together. More Info about ‘Solar’

I woke up and took the ‘Trinity 11.11 essence before getting up. I immediately started to channel Light Language, and could feel the essence beginning to kick in and do its work…the sense of connecting the leylines of the body with the leylines of the Earth…the Crystalline meridians of the body, merging with the Crystalline meridians of the Earth.

I saw the power points of the Planet begin to light up and then the various Earth Chakras began to connect with my human chakras. I saw Uluru as the Heart Centre of the Planet, connect with with my heart chakra; my throat chakra connect to Mt Shasta; my base chakra connect with deepest Southern Africa, and my other chakras connecting to other power points across the Planet. A very physical manifestation was occurring throughout my body. My hands were being moved to the various chakras, particularly the Solar Plexus, Heart and Throat chakras.

I was then shown the importance of taking this essence in advance of going to Ireland in June 2020, to prepare me for the work that I have been called to do there. Basically,  myself and those with me, need to be already connected, hooked up and hooked in energetically, to be ready and activated, in order to be the conduits for what is destined to take place. It’s as if we will constitute one active Operating System – a sophisticated machine or transductor through which the vast and powerful stream of energy pouring in through the newly opened comic portal, can be grounded unto and into the Earth, and then rippled out to every corner of the Planet.

This  powerhouse essence has a two-fold purpose:

1) To help us to release the ‘Shadow’ energy. In order to move into the higher frequencies of the ‘New Earth’, we must first acknowledge and release the Shadow aspects of ourselves.

It would be beneficial to take this essence for an extended period of time, in order to firmly  establish the new neural patterning. I personally have been told that I need to take ‘Trinity 11.11’ every day until the completion of the June 2020 event in Ireland.

For that reason, a 100ml bottle with 4 x times the amount is available at a reduced cost, for those who would like to follow a similar  protocol.