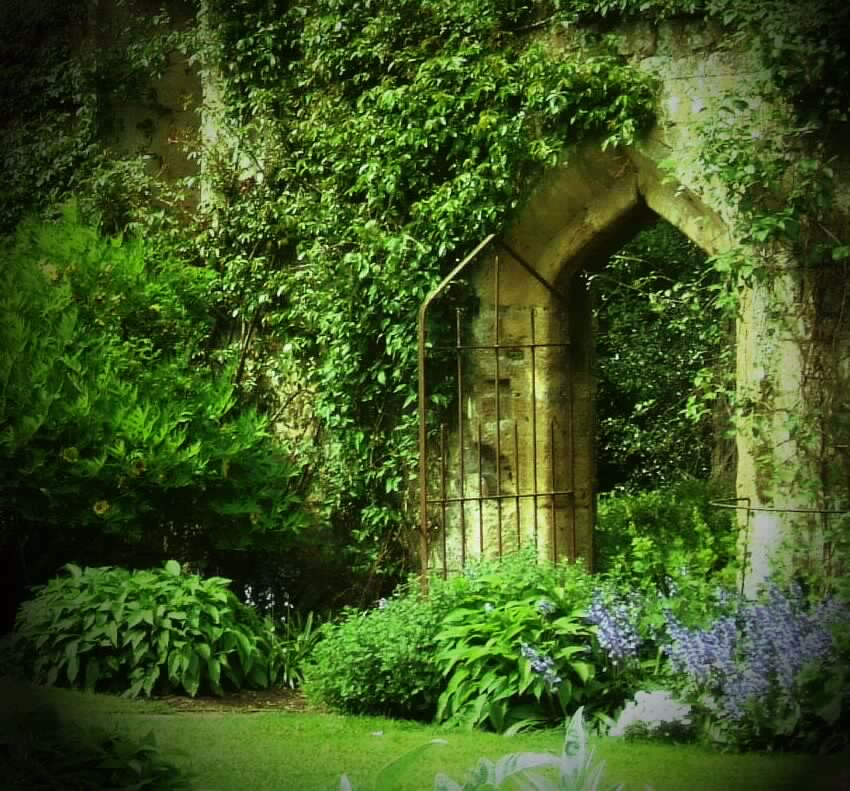 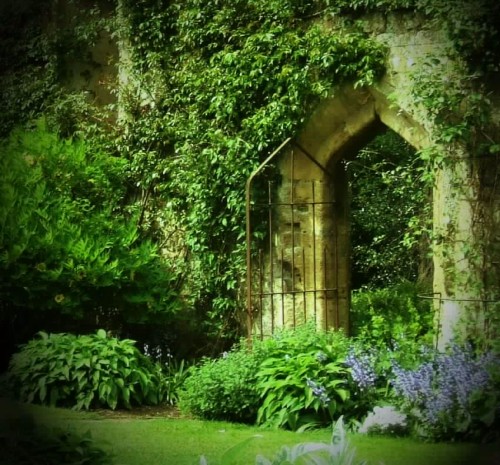 When planning my trip to the US, I received compelling guidance to return home to Australia via San Francisco, despite the fact that it would add hundreds of dollars to my flight costs! My intuition told me that there was something important to do there…and there was!! My visit to the enchanted, crystal garden of ‘Edenlight’ proved to be another experience of inter-dimensional proportions.

So, without having any idea why I was doing it, except to connect with three beautiful friends there – Kristina Walsh of Surfing the Psychic Waves,  Sarah Mc Crosky of Human Spirit Radio,  and crystal mandala artist Laura Almada – I booked a flight to San Francisco for a stay of one night only. Although the three ladies had never met, I suggested that we all rendezvous together, given that the time was so short. I suggested that we might have a crystal playdate, and then just see what unfolded. Laura wrote back immediately bursting with excitement, saying that she had the perfect place for us to gather.

I met Laura ‘by chance’ at a crystal fair in San Francisco in 2012 on my way to Mt Shasta, not knowing at that stage that ‘The Master Skull Solar’ was waiting for me there. Laura works closely with Mickey Magic who was bequeathed the role of official guardian of the Andaras, by their original custodian Lady Nellie. 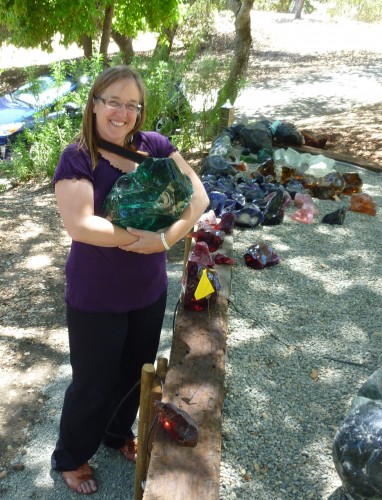 As a result of that chance meeting with Laura, ten days later I ended up in the mountains of Santa Cruz  with ‘Solar’, to work in the newly created Andara Crystal Spiral. This was the first work that ‘Solar’ and I did together and it was quite an initiation! 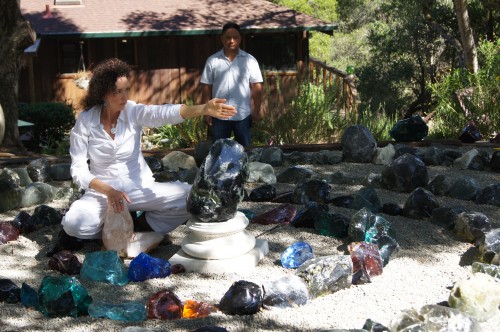 Lia and ‘Solar’ in the Andara Spiral (Photo: Laura Almada)

The following message from Laura confirmed my instincts that another big adventure might be at hand!

“I have friend who is a landscape designer, and for the last 25 years, he has also had a “nursery” that is only open to the public on weekends. The place is a Love-Grounding Engine and a vortex, created by good intention. It has grown in a natural way, as Brian’s spirit has grown.

I met Brian George about 8 yrs ago, when he was looking to start adding crystals to some of the sculptures in the garden. Brian has been adding Andaras to the garden for the last 3 years. It is very difficult to describe….but the result has been a thinning of the veils.

I have always seen orbs and apparitions, but what Brian has been photographing at his garden since Jan of 2012 has been amazing! This is where I would like to take you. I have full access any time, day or night. I also have a portable rainbow: a full spectrum of Andaras from the first batch from the mountain.”

I was of course, immediately hooked and before we knew it, this meeting seemed to take on a life of its own! Our group of four swelled to about twelve – a clear sign that there was indeed a divine hand at work in all this!

My beautiful friend Kristi Walsh picked me up at San Francisco airport and after a dropping bags at her appartment, we headed straight to Laura’s place to connect with the Andara Rainbow crystals, before proceeding to the Secret Garden of Edenlight.

My plane had been delayed so by the time we got there, the other members of the group had already been there for some time. The ecstatic looks on their faces when we entered the garden said it all! Stepping into the Garden of ‘Edenlight’ is like stepping into another world. It’s not just the natural beauty of the plants and the flowers…it’s the treasure trove of crystals, and the dramatic sculptures Brian has lovingly crafted with his own hands.

Jill Stevenson was there too! Although we’d said goodbye just a couple days before in Arizona, she had driven down from Lake Tahoe to be part of this special day. With her, was our mutual friend Claudia Anderson. Claudia is a powerful Crystal Keeper and the custodian of a magnificent and most unusual crystal skull called ‘Marie’, which was carved by  Brazilian master carver Leandro De Souza – the same carver who also released both ‘Solar’ and ‘Illita Singer of the Songs’ from the stone. I had played a part in ‘Marie’ coming into Claudia’s life. 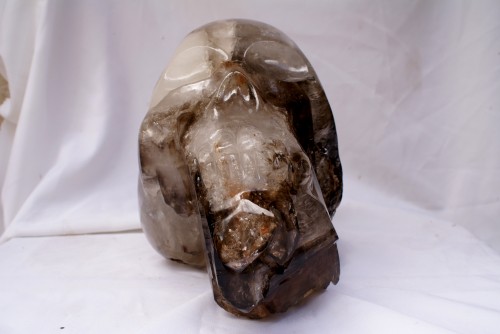 When Leandro first sent me photos of her he wrote;

“Mary is the first ‘Girl’ I  made.
When you are close to or touch this skull you can’t been stressed or nervous – you come to be relaxed and calm. Feel this lady and tell me what she reveals to you.”

Leandro believes most crystal skulls to be androgenous, carrying the energy of both male and female. There are very few skulls he carves that he believes to be distinctly one or the other. When he carved ‘Marie’ however, he knew immediately that she carried the energy of Mother Mary, which is why he gave her the name ‘Marie’. ‘Solar’ too, he knew immediately to be ‘a man’.

When I had spoken to Claudia before flying to the US, she told me that ‘Marie’ was suddenly changing dramatically in appearance. Her original rich brown smokey quartz colour was becoming lighter and lighter, and she was turning into a more milky, clear quartz skull.

Getting to ‘Marie’ ‘in person’ for the first time in the garden therefore, was a very special moment. Laura Almada captured that meeting in this photo which moves me deeply each time I see it. It looks like the ethereal Light Being essence of ‘Marie’ was bending over my head, as I wrapped my arms around her physical form. 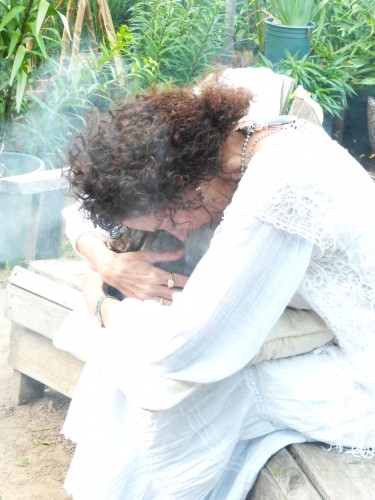 The Light Being that is ‘Marie’ bends over Lia whose arms are wrapped around her (Photo: Laura Almada)

After reunion hugs and introductions, we set out with Brian for what we thought would be an overview of the garden before coming back to our central meeting point for a more formal ceremony. Where Spirit is concerned however, the best laid plans tend to go right out the window! No sooner had we reached the first of the garden’s power sculptures than it was on! When my eyes fell on the incredible jewel encrusted blue pyramid with its spiral motif in the centre, flanked by the majestic figure of Christ in white marble, my channel spontaneously opened. 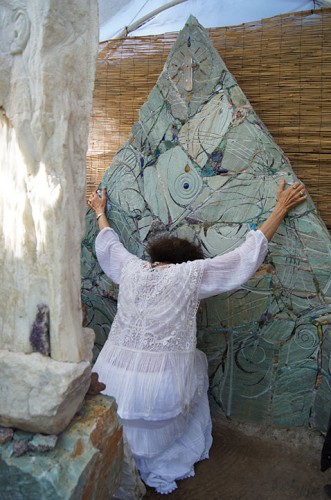 What unfolded at this power node was a ceremony to honour Brian, the garden’s creator and custodian. It was a blessing ceremony to trigger the further activation of the creative gifts he has been anchoring in ‘Edenlight’ through his sacred work. 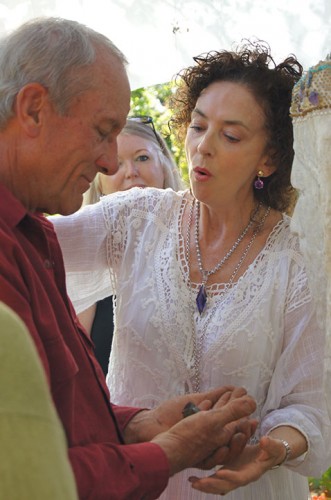 It was only the night before that Brian had completed the sculpting of his incredibly beautiful white marble Christ figure. Somehow, he had managed to move this massive statute into place by himself late at night, driven by the anticipation of our upcoming visit to the garden the following day. Adorned with a crown of quartz points and other precious gems, this figure emanates a quiet strength and power that is is quite awe-inspiring. 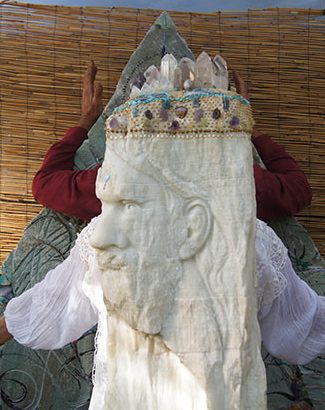 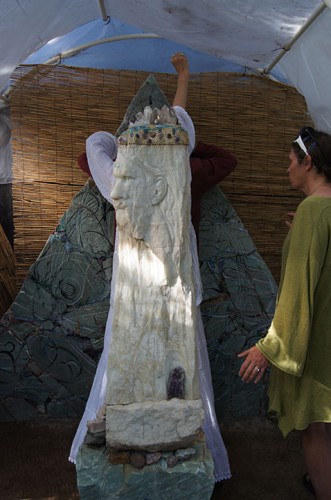 To me, Brian is like a modern day Merlin…a Light Wizard capable of pulling pure beauty from the ethers and grounding it in a tangible, physical way. Almost all of Brian’s life is now dedicated to tending this secret garden, and sculpting new creations to adorn it. He works and lives in his flower covered, Wizards’ Den made from tree branches, hidden deep in the bushes! 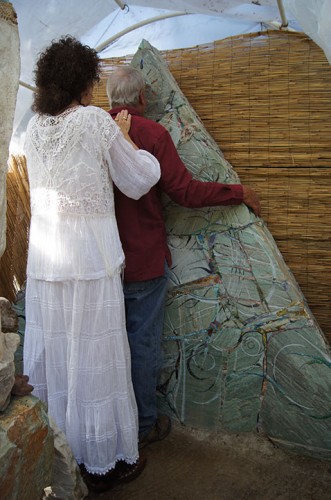 The next power node of the garden we visited was that dedicated to the spirit of the garden ‘Edenlight’. Brian has captured extraordinary apparitions of both ‘Edenlight’ and her daughter ‘Iris’ on film. Here is one of them… 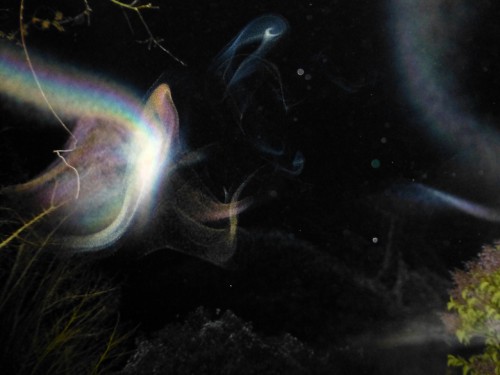 The Spirit of ‘Iris’, daughter of ‘Edenlight’ (Photo: Brian George)

You can see a few more of Brians extraordinary images at http://fineartamerica.com/featured/iris-3-brian-george.html
These photos are 100% straight out of the camera with NO digital manipulation of any kind.

At the ‘Edenlight’ power node an incredible ceremony ensued. When I was introduced to Jill’s friend Bato that day, I immediately saw him as a fellow star being. As the entire group held the energy around us at the ‘Edenlight’ altar, Bato and myself seemed to be constructing some sort of bridge between the earth and the cosmos. I felt the energy blasting through me, and I think every member of the group felt a similar power and purpose. 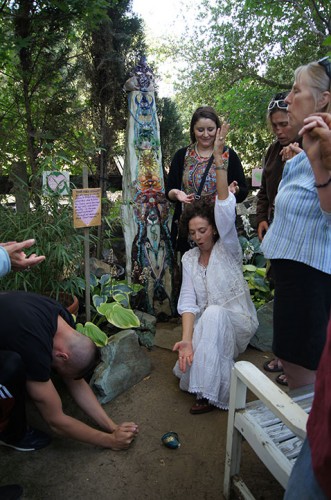 The group holds the energy as Lia and Bato create the bridge between the earth and the cosmos.

This was the reason our divinely selected group had been called  here. There was a profound sense within all of us I think, that we were performing a most important service for humanity and our Mother Earth. 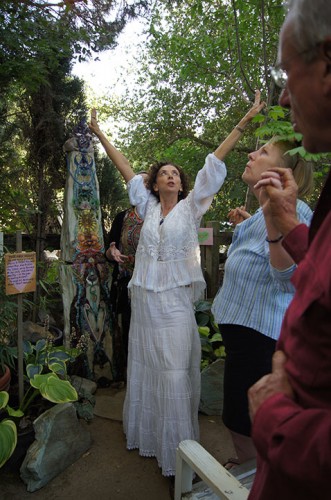 These were moments I will forever treasure and hold dear in my heart. 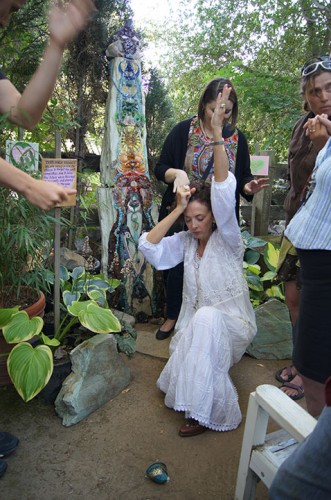 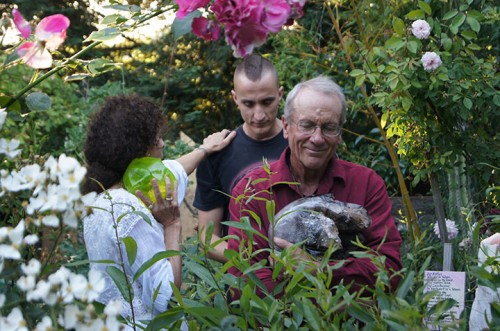 Lia, Bato and Brian who cradles ‘Marie’ in his arms

An overwhelming sense of Love poured into and over all of us as we stood in the rose laden grove of ‘Mary’s Altar’. The energy was further amplified by the huge, bright green Andara Crystal Guardian I had seen at Laura’s home, that I immediately ‘knew’ wished to come with us to the garden 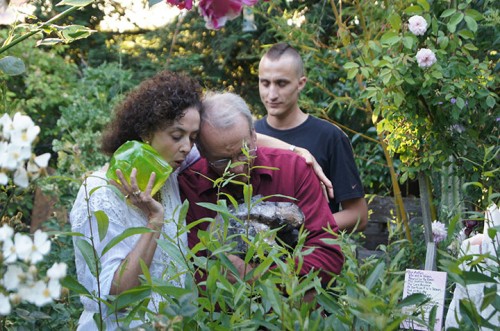 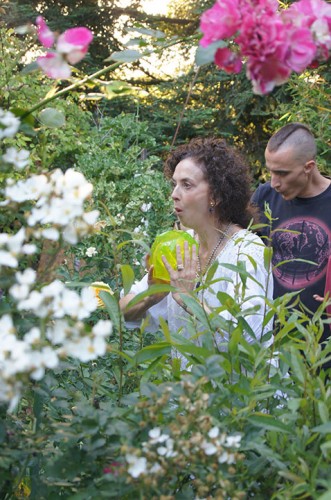 Brian had been inspired to create a special altar to Mother Mary within his magical garden. The skull ‘Marie’s visit’ and her presence at that altar, was divine endorsement and a gift of gratitude to Brian, for the pure heart and soul he has poured into this place. 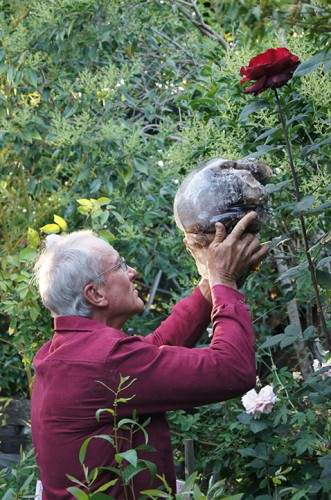 The secret and sacred garden of ‘Edenlight’ is a healing Presence. Being there was a pure and truly heart opening experience for each and every one of our divinely chosen group. ‘Edenlight’ is an enchanted garden, full of Crystal treasures, beauty, magic, mystery and Love.

Just before driving me to the airport the following day to catch the plane for Australia, Kristina took me to the Grace Church in San Francisco…there was something there she wanted to show me. I was astounded when I walked through the huge golden doors of cathedral, to see an enormous spiral labyrinth etched into the floor.

I had walked the Spiral Way in Chaco Canyon and witnessed my three skulls ascend through it; I had put my third eye to the Spiral embedded in Edenlight’s Blue Crystal Pyramid and felt its powerful energy run through me; now one more time before leaving the USA, I was destined to walk the sacred spiral again…one more time, I walked The Spiral Way. 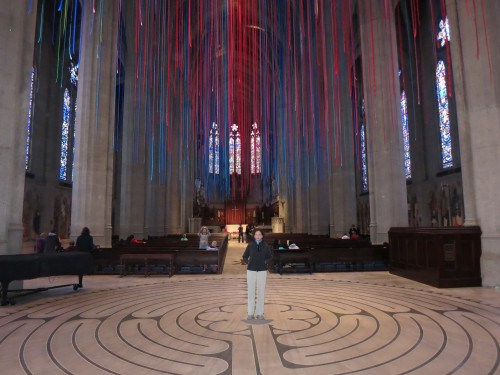 If you live in, or plan to visit San Franciso, and you’d like to visit Brian George’s sacred ‘Edenlight’ garden in Novato, Brian can be contacted at: 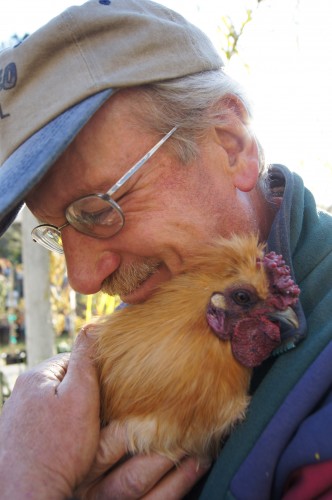