The Crystal Pyramid – The Background 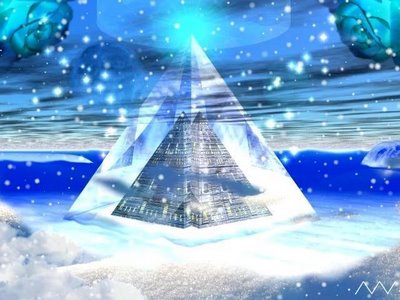 As always, time disappeared when I created my Equinox Crystal Grid. Three and a half hours passed before I finally emerged from that inter-dimensional Portal!

On waking I was shown the basic format for the grid and the main purpose behind it. But, a little background first….

At the beginning of the year, after selling our home, my husband and I found ourselves in Trinity Beach near Cairns, in temporary accommodation. Whilst on a walk one day, I had an extraordinary experience involving two large Stone Guardians I’d become aware of overlooking the coastline. The experience, which almost saw me fall from a very high precipice, was I believe, designed to shock me into awareness of the powerful energy of that particular spot.

Back in the appartment I decided to meditate to glean if there were any deeper significance to what had occurred. I was told that there was a Master Crystal in the area I was to assist in re-activating. This was not for now however…the activation would take place after we moved into our new home, as I would need the assistance of The Master Solar and my crystalline family. I resonated with this information as over the past 10 years, I have been called upon to re-activate three other Master Crystals in different parts of the globe, crystals I believe were de-activated at the fall of Atlantis to guard against the misuse of their power.

Moving house is no small task so I set all this aside, knowing I would receive more information when the time was right. A few months later when the last crystal was finally unpacked, the moment came for me to fully anchor our energy into our new home, and dedicate myself to creating a new crystalline vortex of Light in this particular space.

Immediately on beginning the ceremony, I saw a crystal pyramid descend over our home. Another inverted pyramid moved in from beneath it. When the two met, the house sat inside a pure crystal merkaba which I realised was actually a Light vehicle that had the ability to spin. Throughout this experience, I found myself connecting with the landmark Trinity Beach pyramid-shaped mountain, visible from my crystal room.

An hour and a half later I had lunch with a friend I hadn’t connected with for a couple of years. Knowing absolutely nothing at all about my mediation, she said, “I suppose you’ve heard about the Crystal Pyramid that’s supposed to be in this area?”

Completely unsought and out of nowhere, I had received proof positive of what had occurred in my private ceremony!