This unique, handmade Generator’s pyramid shape combined with the properties of Copper and Quartz, make it a powerful energy magnifier. It can be used for chakra balancing, protection, gridwork, healing, and manifesting with intent.  Use it in your healing work by placing one on each chakra or desired area to be worked on, or place one under your healing table. A generator in the four corners a room will protect and energise the space and promote a positive flow of energy.

“Lia, in the hour or so since I opened the package, the Crystal has changed! Another pyramid is forming inside, and in one corner a Citrine pyramid is also forming facing outwards!!!!! Divine magic at work.” Annette Wishart

“I just put an order in for another copper & quartz crystal generator. They are like little dynamo’s – beautiful energy. I love them!”   Cheryl Goodsell

“I opened the package this morning and they are stunning! The energy is amazing to hold. I’m putting one in my daughter’s shop and gifting one to a friend!”   Miranda Short

Mystical Properties
Due to the fact that copper is such a wonderful physical conductor of electricity and heat, it is also considered the conductor of spiritual energy. According to myths, copper has the ability to conduct energy back and forth between individuals, crystals, auras, the mind and the spirit world.

It is also believed that copper has the power to amplify thoughts when sending and receiving psychic communications. Many crystal lovers carry copper with their crystals to enhance the properties of them. Copper is often used when crafting crystal wands to keep them clear and strengthen their powers. Copper has been used in the healing rites of many peoples of this world.

Healing Properties
Healers base their belief in Copper’s power to heal the mind and body, based on the metal’s energy conducting properties. These same healing qualities can be found in crystals and minerals that contain Copper traces. Copper is believed to alleviate cramp like symptoms, to help prevent wear, tear and calcification of the joints and also said to promote the smooth functioning of the glands. It is used to assist with arthritic and rheumatic diseases, and also to speed up detoxification, improve circulation and oxygenation of the blood, increase energy, reduce inflammation, and stabilise metabolism.

Scientific Properties
Copper is a reddish-colored metal, with a high electrical and thermal conductivity (silver is the only pure metal to have a higher electrical conductivity at room temperature). It has a Mohs Hardness of 2.5 with a cubic crystal structure.Copper has its characteristic color because it reflects red and orange light and absorbs other frequencies in the visible spectrum, due to its band structure. This can be contrasted with the optical properties of silver, gold and aluminum.

Copper occupies the same family of the periodic table as silver and gold, since they each have one s-orbital electron on top of a filled electron shell. This similarity in electron structure makes them similar in many characteristics. All have very high thermal and electrical conductivity, and all are malleable metals.

In its liquefied state, a pure copper surface without ambient light appears somewhat greenish, another characteristic shared with gold. Silver does not have this property. When liquid copper is in bright ambient light, it retains some of its pinkish luster. Due to its high surface tension, the liquid metal does not wet surfaces but instead forms spherical droplets when poured on a surface.

Copper has many properties which make it nearly indispensable to modern civilizations. It is an essential nutrient to most plants and animals. In humans and animals, it is found primarily in the bloodstream, as a co-factor in various enzymes. In sufficient amounts copper can be poisonous and even fatal to organisms.

Lia’s Experience of Pyramid Power
When I came across this Pyramid Generator, my immediate intuition was that I needed to place one in the four corners of each room in my home and office to protect the space, as well as amplifying the energy of intent I consciously set within it. However, as soon as they arrived and I unpacked the pyramids I was guided to create a large Crystal Grid within which to lie, which incorporated 15 of the crystal pyramids. When I looked at the finished grid I knew that what I had created was a Light vehicle of some sort. This grid is still on my floor three weeks later! It has morphed over that time but each time I lie within it, the energy is is so incredibly powerful that I go completely ‘out’, and wake up knowing I have been somewhere else….I know not where!! 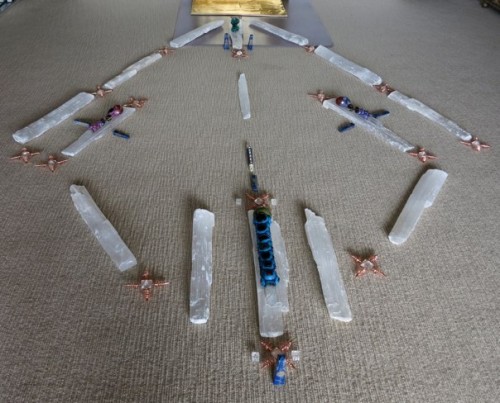