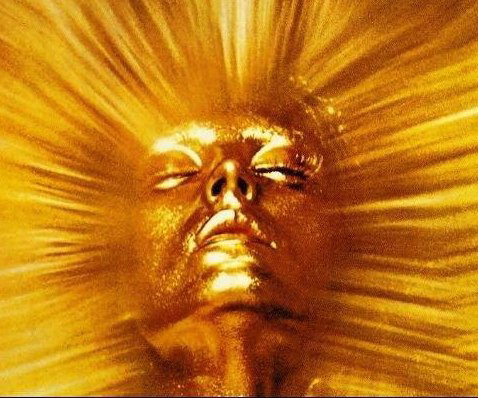 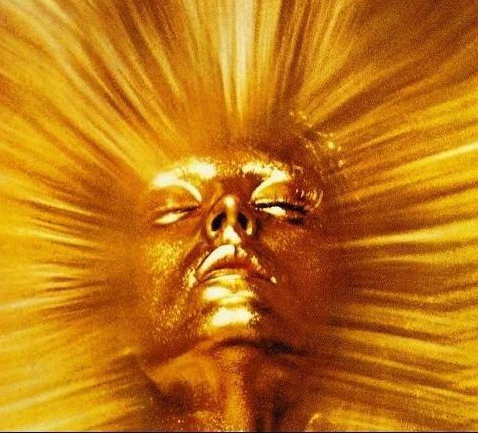 Here’s a reminder of what the very important Light Code download on Wednesday, February 25th 2015 is all about….

On interpreting the astrological Sabian Symbols for February, Steve Pitt of the Lightworkers Guild sent me the following summary of the astrological predictions for the major download of energy that looks set to take place on February 25th.

This burst of energy, expressed in the form of neutrino particles that can be measured, comes not from the sun but from galactic sources.

This energy has already been in full flight throughout February, and many of you may have been feeling it – I know I have!  The neutrino readings recorded by Nasa have apparently been going completely off the charts and Steve describes it thus:

“We have been cooking in a neutron bath! Anyway you look at it,” he says, “big stuff is happening. You got angels, a great teacher, the well of mysteries, beams of light, ceremony, meditation, great inspirations…and something about a change in medicine because of a genetic altering from Source.”

All is now in place for what I believe will be a most important ceremony of ‘Rebirth’ on February 25th. The Guidance I’ve received on the format of the ceremony is that it should take place in a private rather than public setting. I’ve been assured however, that this will in no way diminish the effects felt by those who wish to join in remotely.

I will be transmitting from the mountain top in Atherton. Sacred geometry sculpture artist Bob Matthews, has constructed a special Phi pyramid in copper for the occasion, within which I will sit. On either side of me will be ‘The Master Crystal Skull Solar’ and ‘Illita Singer of the Songs’, and behind me will sit another one of my powerful skulls, ‘Sorrow Sitara’. Beside each of the three crystal skulls will be three specifically toned crystal bowls. These will provide the tones to assist in opening the etheric portal through which the download will descend. At the moment it seems that including myself, there will be 13 people present. This will reflect and enhance the power of the sacred No 13, and amplify the energy of ‘The Master Skull Solar’ who has been described by two separate mediums, as being ‘The 13th Skull’.

All my instincts tell me that this may well be one of those critical moments when we are granted a unique opportunity to experience dramatic transformation. I urge you not miss it. Please find time on that day to sit in sacred space to receive, and if possible, to connect energetically with me during the time I’m bringing through the Transmission. Playing one of the ‘Sounds of Sirius’ CDs will help to attune you to my vibration, and if you are the caretaker of a Source Stone, holding that will be a wonderful way to help strengthen the connection through the sacred Indigo Grid.

The advantage of being in your own space when you receive the download is that if you do experience an intense physical or emotional response to the incoming energies, you can rest for as long as you need to in comfort, allowing the codes to fully integrate without disturbance from any outside influence. 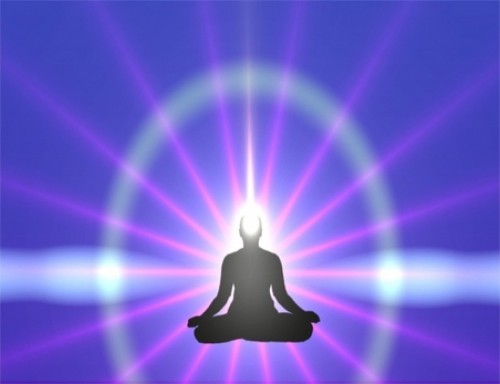 According to the astrology, the exact time of the Galactic Light Code download is 17:03 UTC. If I have done my calculations correctly, that will be 3.03pm where I am in Queensland, Australia. The energy however, will be felt just as powerfully an hour or more either side of this time.

I have been strongly prompted to begin my ceremony at 1.11pm. I feel the energy of the numbers 1.1.1 will assist in opening the gateway. No.1 is the energy of new beginnings;

I have been preparing myself for the upcoming Transmission for the past three weeks, by doing daily channellings. Each one has been intense and powerful…a glimpse I think, of what will be downloaded in two days time on February 25th. During this morning’s ceremony which lasted a full two hours or more, a powerful crystal grid was created. As I believe many of the crystals that came forward wish to be part of Wednesday’s ceremony, I’d like to share this grid with you. It may help inspire you to create your own grid on the day, and may also give you a more visual connection to me when you sit to receive the Transmission. 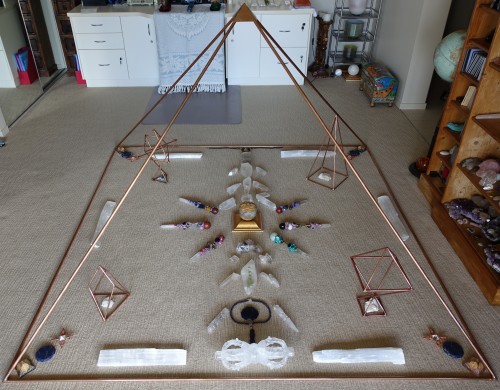 At the beginning of the ceremony, I sat in the centre of the copper pyramid, directly under the capstone, surrounded by the other four copper sacred geometry. In each corner were the master Source Stones, Sidhe Spiral Organite Pyramids and Copper  Quartz generators. In my hand was the fifth Master Source Stone – the personal Stone that I use to assist with bringing in the Transmissons. As the ceremony progressed, one by one, crystals presented themselves to be part of the building of the energy.

That the centre of the grid sits ‘The Luminous Pearl’ – the rare, ancient artifact that mysteriously glows in the dark. This is the crystal that inspired my recent album of the same name. 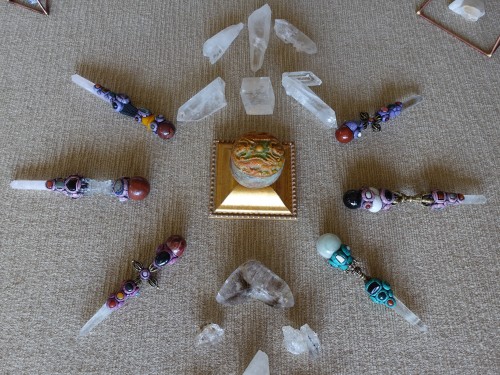 In front of each of these corner spreads, stands a piece of copper sacred geometry sculpture, created by Bob Matthews 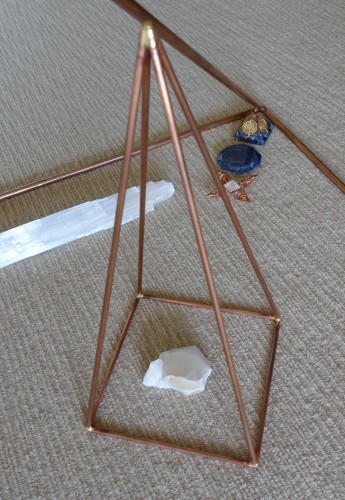 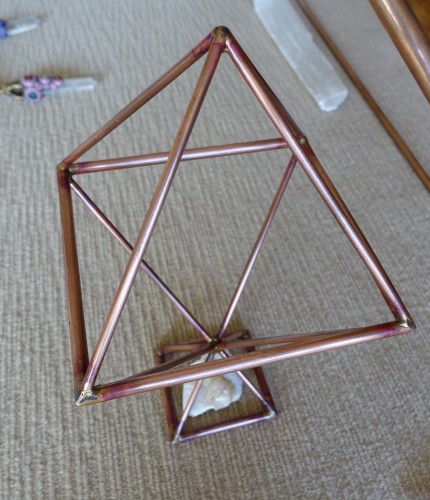 Octahedron –  healing on an energetic level 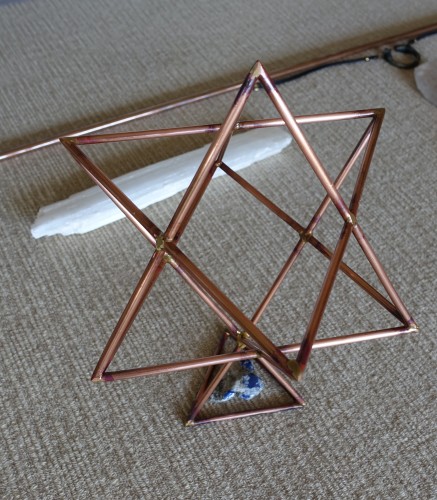 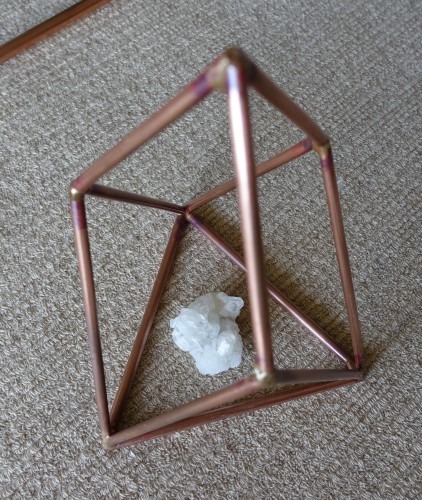 My personal Master Source Stone now sits encased in the arms of a Lapis Lazuli necklace, from which hangs the Goddess of Compassion Quan Yin, also carved in Lapis which has long been known as the stone of Royalty. 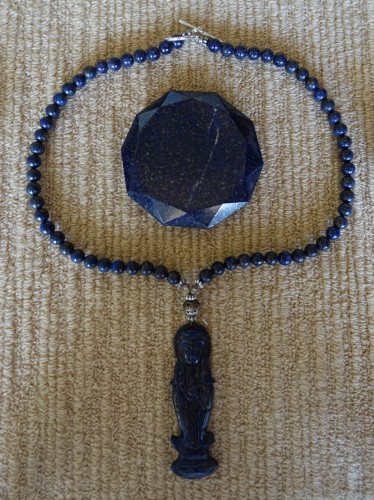 Overseeing the creation of this power grid were the three skulls that will surround me on Wednesday when I transmit from the mountain.

‘The Master Skull Solar’ who has proven many times that he himself is a dimensional gateway, giving us access to the unseen worlds. 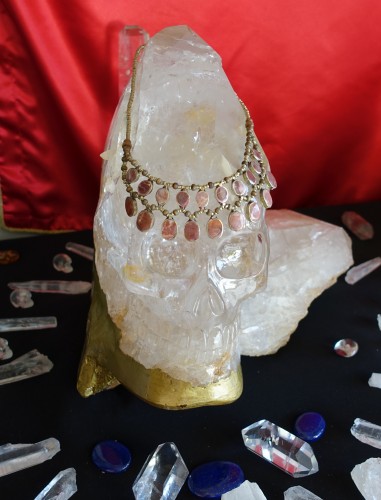 ‘Illita Singer of the Song’s, she who was there at the seeding of this earth, and as such knows all about the human condition and what it takes to ground Spirit into matter. 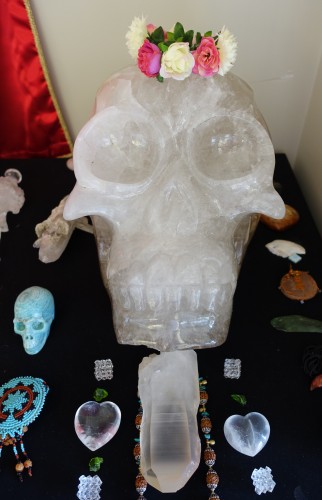 And the beautiful ‘Sorrow Sitara’, who shows us how to access our own sorrow, release it and return to our original state – that of being a very spark of cosmic Starlight. 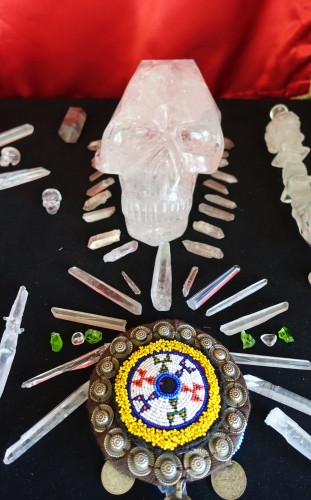 I hope that you will feel drawn to join me and the group of powerful Lightworkers who will surround me on the mountain, when we open the gateway at 1.11pm on Wednesday to receive the Light Codes being gifted.

Whoever you are and wherever you are in the world, you matter greatly. We are the Global family of Humanity and as such we are all One, each of us with our own unique gifts to contribute. If we consciously join together with pure intention in this moment or potential, I believe we can harness the incoming flux of Galactic energy to raise our own frequency exponentially, and at the same time allow the beautiful Mother Earth we inhabit, to raise her frequency too. 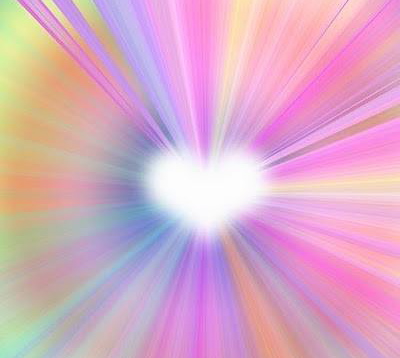 The Dimensional Doorways are opening wide for us…
Let us seize the day and with an open heart
Walk through with Courage, Joy and Love.
If there are enough of us,
We will carry our ‘unawakened’ Brothers and Sisters with us.

PS: As I pressed ‘save’ on the final draft of this post, I glanced at the digital clock on my computer. My heart gave a little leap of joy when discovered it was 3.33! This is immediate confirmation from above surely, that the numerology I spoke of above, does indeed have a powerful role to play in the upcoming ceremonies.