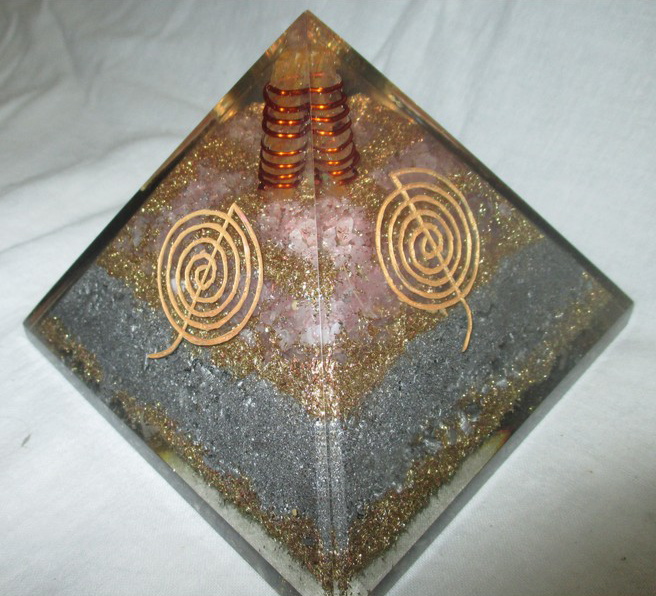 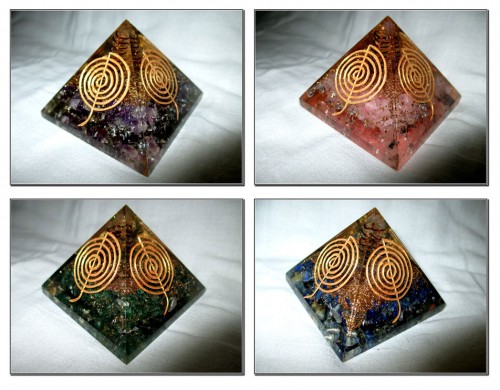 The ‘Sidhe Spiral’ Orgone Crystal Pyramid can best be described as a transmitter of Universal Light, otherwise known as Source energy, that is the animating force behind all creation. The Sidhe pyramid has the capacity to automatically transform lower or negative vibrational energy into higher, positive vibrational energy.

With it’s layer of powerful gemstones across the entire base of the pyramid, and a clear quartz generator crystal wrapped in copper that stands like a tower at its heart, this orgone device, has been created to capture and enhance the natural abilities of crystals within it. The particular crystals, chosen for their energetic properties, are encased within a special resin laced with metal shavings. The inclusion of the metals allows the etheric energy to literally be amplified and conducted with greater power to the capstone of the pyramid and from there, outwards to the user and the environment.

“The pattern of the Glyph acts like a magnet, pulling the two worlds closer together so that both may be perceived.”
‘The Sidhe – Wisdom from the Celtic Otherworld’ – John Matthews

The first shipment of a much larger Organite pyramid I commissioned has also just arrived! This size is marvellous for transmuting negative energy and EMF radiation in entire rooms and larger spaces. To give you more choice, apart from the customised Sidhe Spiral version there are two other designs available, both of which incorporate the Reiki power symbol the Cho-ku-Rei.

As well as being energetic healing tools, these pyramids are also a work of art that will beautify any space. They are particularly magical under direct sunlight, or at night when the crystals and metals glisten under the light. 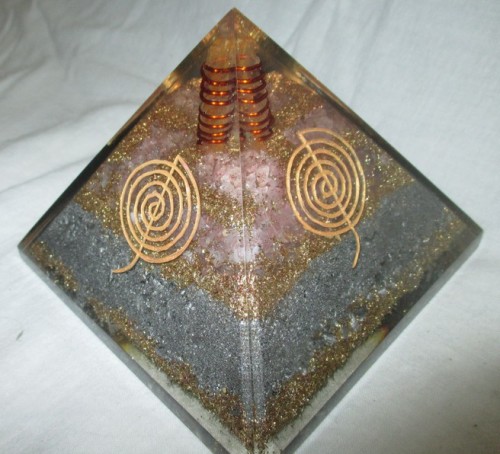 What People Have Experienced

“I absolutely LOVE my pyramids – they are extremely stunning. . As soon as I opened the box I could feel the power. I got a whammy of boost energy with the rose and amethyst little ones and  when I held the other two, I felt a strong grounding. Last night I used them for healing by putting them on the trigger points on my shoulders (I’m trained in trigger point massage ). When I placed the rose quartz point on my sternum for healing, the gentle vibrating energy made me feel like my etheric body was elevated…it felt like they were in my auric field.

Each individual pyramid has its own unquestionably unique force field that truly is powerful. They have given me the grounding I needed in the energy fields connected to each chakra, as well as the chakras many are not even aware of. I intend to use the pyrmaids in my healing work by placing them on the chakras that ‘call out’ for adjustment,and other healing requirements. I feel a stronger connection to my Galactic family too. The top of my head feels like a metal plate slowly rotating.”
Carine Woder

You will find more in-depth information on the different elements of these exquisite healing tools on the individual listings. There are some wonderful LAUNCH SPECIALS to investigate, including one featuring the larger pyramid too!!