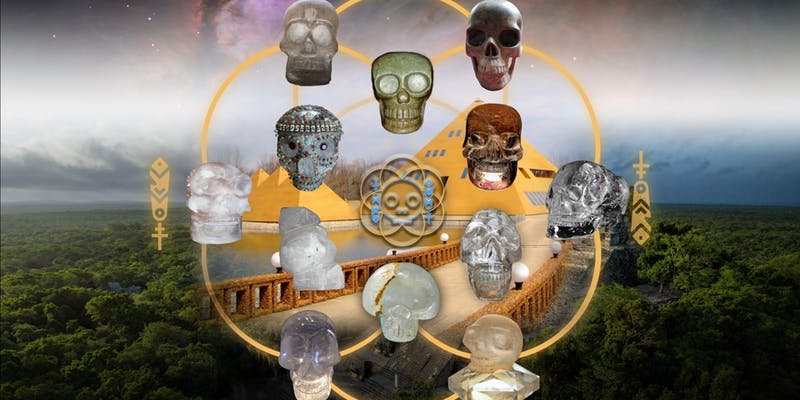 There are a number of events taking place in the coming week that underscore the potency of the upcoming Equinox on September 21st. An incredible 6-storey Golden Pryamid in Wadsworth, Illinois, will host the inaugural ‘Crystal Skull Unification Conference’, where many powerful crystals skulls and their caretakers, including the mysterious Mitchell Hedges skull, will join together to share crystal skull knowledge, healing and wisdom, to further the cause of peace.

This energetically active Gold Pyramid triggered an artesian spring to gush forth when it was built, making it the perfect place for the special  Water Ceremony to be held on Saturday, September 21st  between 9am-10am, at the Golden Pyramid in Illinois, led by Oglala Sioux Water Carrier and Pipeholder, Lisa Gerardi. Wherever you are in the world, you are warmly invited to join this ceremony of unification through the waters. Conference organiser Mary De Laat, now the caretaker of the magnificent Jade skull Ixchell who I’ve met and worked with on visits to the USA, has been gathering sacred waters from across the globe for the ceremony. She asked if I would send some water from Australia, which I gladly did.

I was shown that I needed send Mary water from the same spot where I performed a previous water ceremony to coincide with the Solar Eclipse in August 2018. At that time, Cece Stevens who orchestrated the powerful 9.9.9 and 11.11.11 Crystal Skull conferences I attended in Arizona, contacted me to ask if I would join her in encouraging people to pray for the healing for the planet on that day. Cece’s vision for that 2018 water ceremony provides a perfect guideline for our upcoming ceremony…

A couple of weeks ago, as per my Guidance, I returned to that same spot at the water’s edge, to procure water for the ‘Crystal Skull Unification Conference’ Water Ceremony. As you will see from the photos below, these waters have already been activated with Crystal Skull energy through my 2018 Solar Eclipse ceremony, the memory of which I still treasure. I hope the following account of what happened on that day may inspire you to gather with your friends, crystalline and/or human, on September 21st, to create your own water ceremony.

The final eclipse of the ‘Triple Eclipse Tsunami’ was to take place on August 11/12/13th New Moon in Leo. According to James Tyberon of Earthkeeper.com the emphasis of this fiery eclipse would be on Emotional Resonance : Clearer Vision, Psychic Opening, Venus Harmony. Others said it would bring focus to self-empowerment, personal authority and community building. 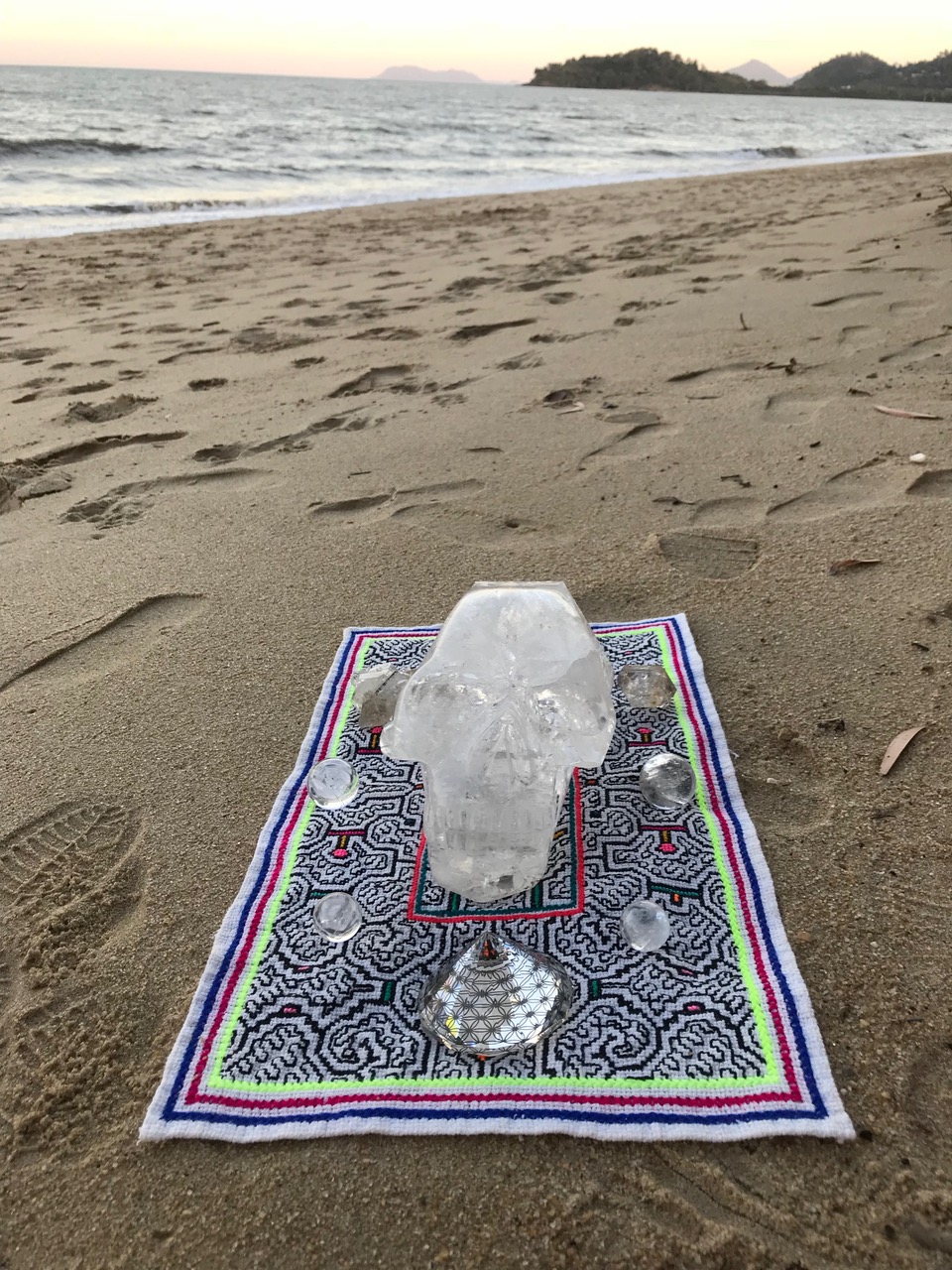 As planned, at the 6.02pm commencement of the Solar Eclipse, I was on the beach with my beautiful crystal Skull Teanna and other crystals, to send out healing to the planet through the waters. It was a magnificent Cairns sunset, with Double Island and the pyramid-shaped Trinity Beach hill etched on the horizon. I had the beach almost entirely to myself throughout my ceremony, apart from one or two locals walking their dogs.

I consciously connected with everyone across the globe who promised to join in this union of Love, putting out strands of connecting energy lines to the many locations in Australia and the USA, to Mexico, South Africa, Europe, the UK, and Ireland. I focused too, on the sacred sites across the planet – all the pyramid structures, the thousands of Stone Circles, the Holy Wells and springs, and all the oceans, rivers, waterfalls streams, that are the source of so much that helps us to sustain life. 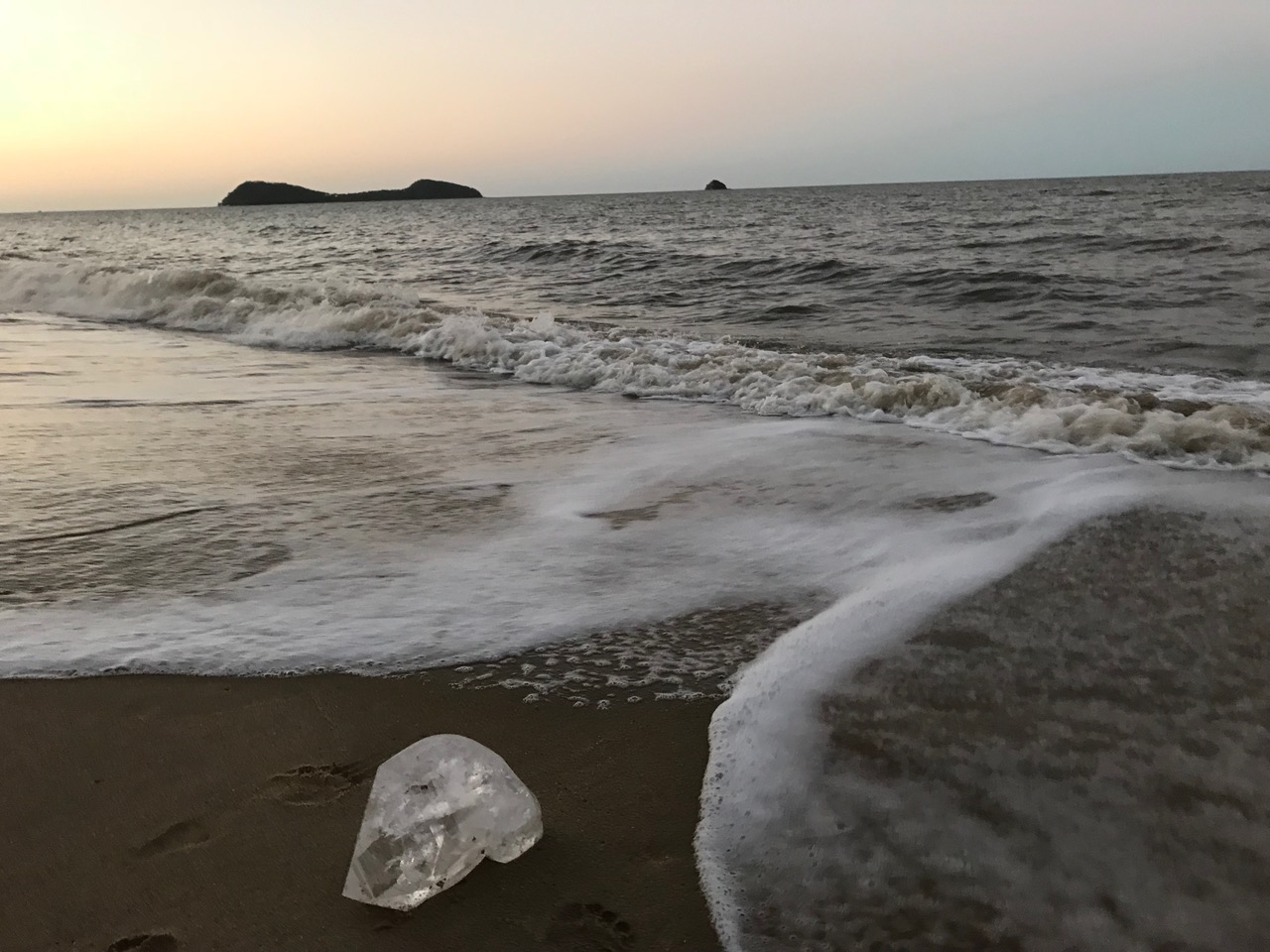 As I placed my skull Teanna in the ocean, I asked her to gift the knowledge and wisdom contained within the many powerful ancient sacred sites she has visited, along with the pure Luminous Light she carries, into the waters, to help dissolve all the anger, fear, resentment, pain, suffering and grief that humanity has endured over the millennia. It is time to move out of this old energy and to envisage a new way of being, where joy, unity and sovereignty of self are foremost. 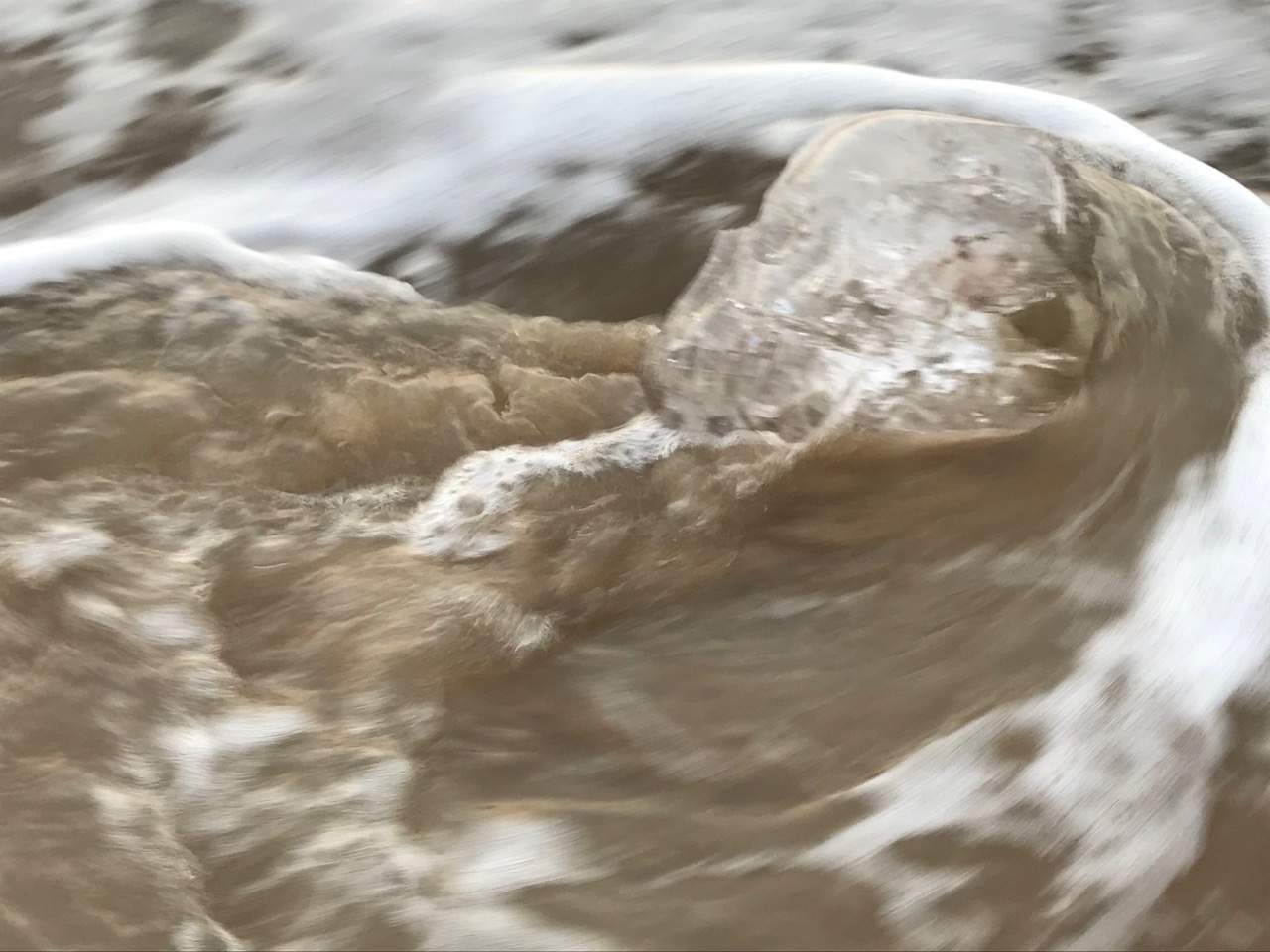 As the sunset drew to a close, I had a most beautiful and unexpected encounter. Unbeknownst to me, as I stood by the waters edge with Teanna at my feet, a beautiful young girl of about 9/10 years of age, riding her bike along the Esplanade parralel to the beach, spied me. Curious as to what I was doing, and wondering what that thing was at my feet (!) she made her way quietly down unto the beach and, when I intuitively turned around, there she was behind me.

“What’s that”, she said, looking at Tea. I told her that it was a very special crystal and that we were sending out healing energy to the planet. She immediately responded, “We have friends who do that. They put crystals into the water. Me and my Mum have started to paint stones. We paint messages on them and then throw them into the ocean, or sometimes we hide them on the beach for people to find.” I asked her if she would like to hold Teanna, and as Teanna rested in her arms, I told her a little bit about the crystal skulls, and about the eclipse. Then I brought her back to show her the other crystals on my little beach altar.

There was one last thing to do before darkness fell, which was to gift my own crystal offering to the water. Taking my new little friend Dakota by the hand, we walked back to the water’s edge. There, I spoke a prayer for the planet on behalf of us both, before gifting the crystal to the ocean. It was such a special moment. This impromptu meeting, so perfectly orchestrated by the Universe, is a memory I shall cherish for a long time to come. I hope that as her life unfolds into adulthood, this beautiful and angelic young woman Dakoka, will remember it and cherish it too. I could not have wished for sweeter confirmation that the universe was listening and had heard our prayers, and that the promise of a new future awaits us. 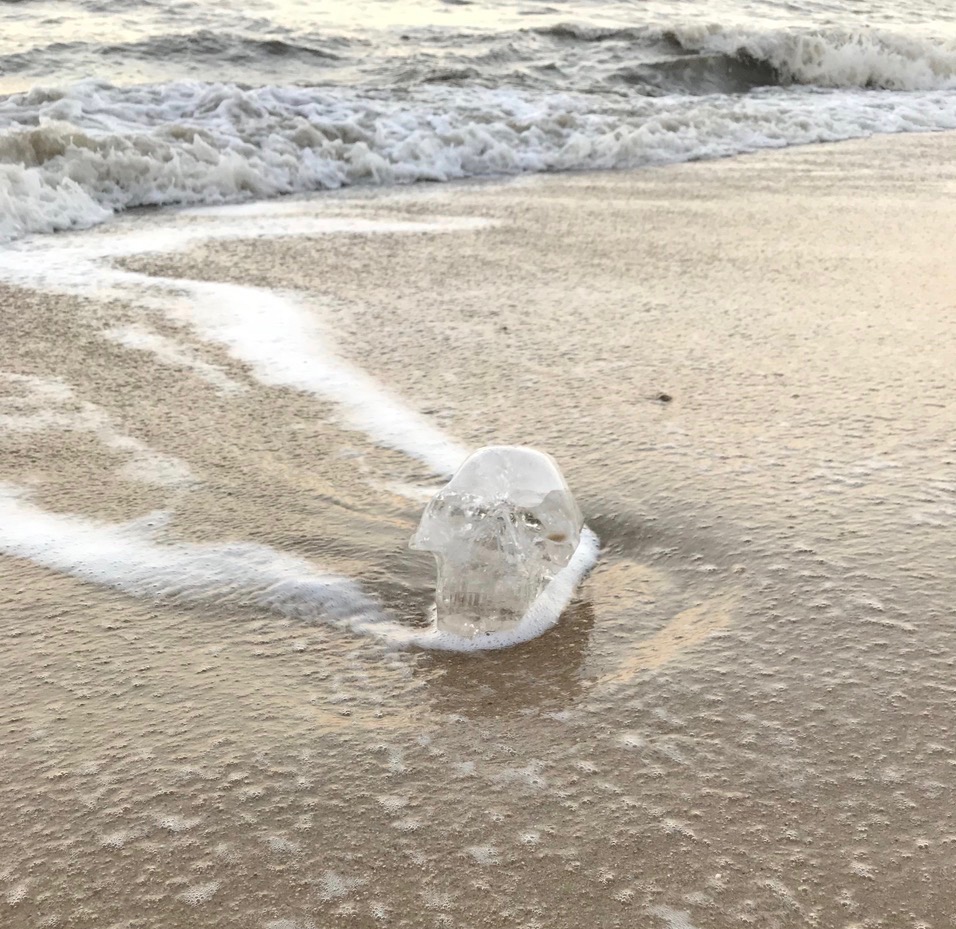 Next Saturday, September 21st, it is my intention is to return once more to the shores of the Pacific ocean here in Cairns with my crystal skull Teanna, to join my energy with all those present at the ‘Crystal Skull Conference of Unification’ in Illinois, and the hundreds, if not thousands of people across the planet taking part in this global water ceremony. With focused intent, I shall send out my prayers through the waters of the Great Barrier Reef, the largest living organism on the planet, for the healing, harmony and peace of our beautiful Mother Gaia and every living thing who dwells upon her. I truly hope that you will join us in this endeavour too. 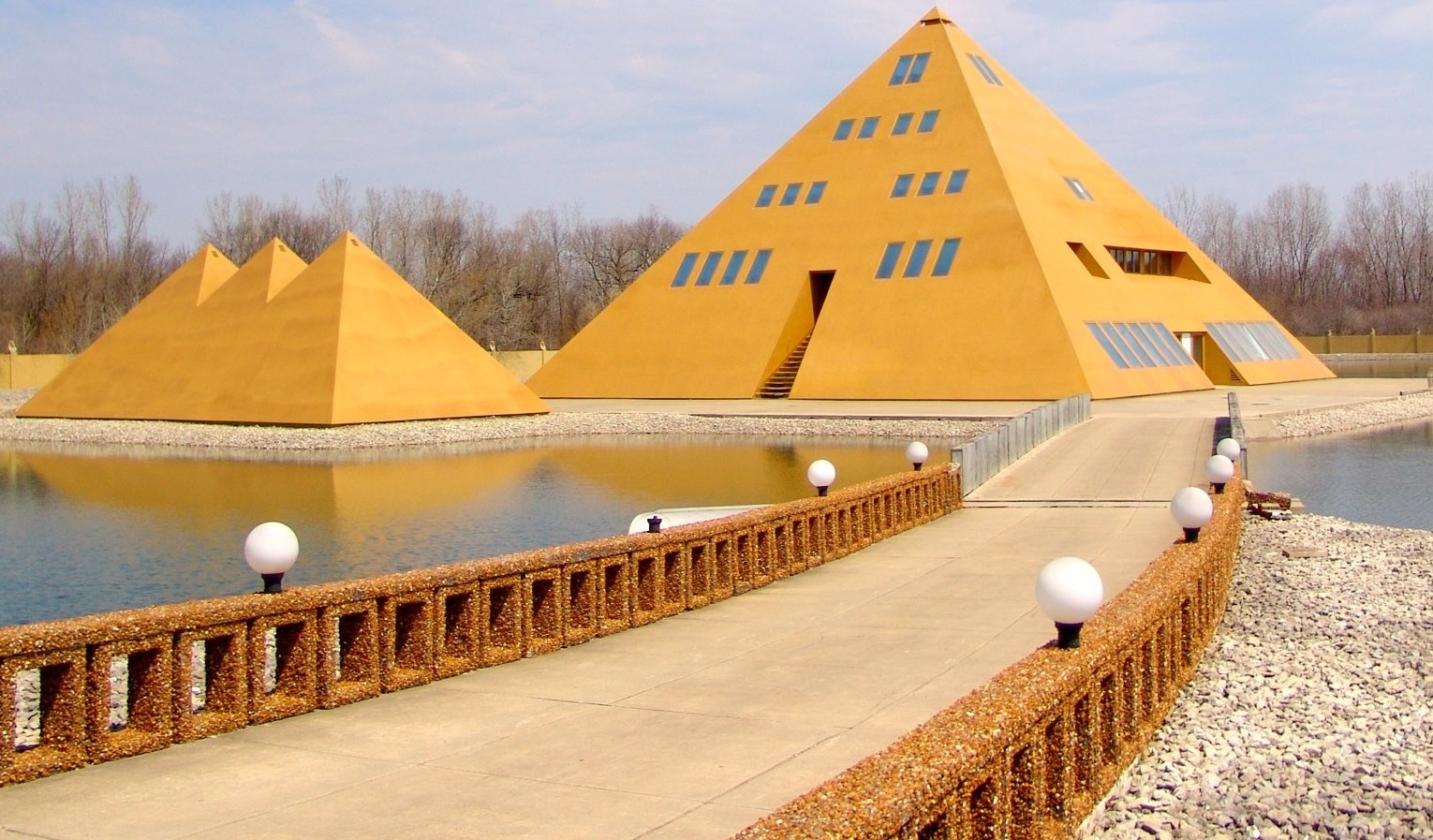 Note: 9am September 21st in Illinois will be 12 midnight in Australia, but don’t let that deter you. 3D linear time is of little consequence in matters of energy and Spirit! I plan to do my ceremony at sunset the day before, to build the energy for the Illinois event. I believe that he ripples of energy we send out as the advance guard, will add potency and power to the ceremony at the Golden Pyramid.