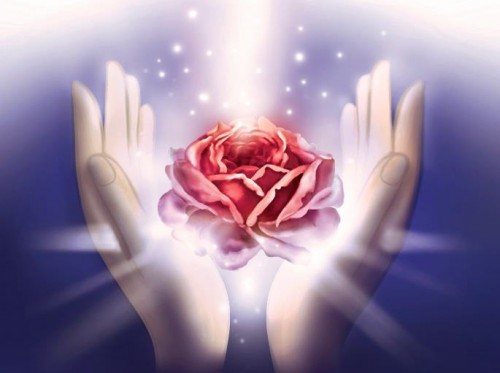 Just after I last wrote, I drove up the mountain to the small, sleepy village of Ravenshoe which sits at the highest point in Queensland. The town has since received country-wide attention due to the freak accident that resulted in horrific injury for many and death for others, when an out of control vehicle drove into a busy café in the main street. My purpose for visiting Ravenshoe that day in May, was to assist in laying the final spiritual foundations for the Enuma Elish Healing Centre, a place that will play an even more important role in the area now, in the aftermath of the trauma and tragedy suffered by the local residents.

Wendy Everett and her husband Johnny, custodians of a pristine tranch of rainforest, have over the course of many years lovingly cleared selected spots on their land to create sacred spaces. For the past two years they have worked tirelessly on a huge area next to a beautiful flowing creek, for a space large enough to house a healing centre. Johnny has literally cleared every piece of the pervasive and tough Lantana by hand.

I visited the spot on one previous occasion towards the end of this clearing process. On ‘Crystal Skull World Day’ in November 2014, a group of 33 of us gathered with several powerful crystal skulls including ’The Master Skull Solar’ and ‘Illita Singer of the Songs’, to do the first public ceremony there. We felt that this was a landmark day for Enuma Elish, in that it formally marked that piece of ground as a healing place, to which in the future, people will travel from far and wide.

During a meeting with Wendy and artist Clive Walters in April this year, we received a strong message that before the Yurt building for the Healing Centre was erected, a ceremony of intention needed to take place, to further anchor the energies into the land. Later, I received a more detailed vision of what would actually take place when we gathered. In a vision, I saw twelve very tall Inter-dimensional Beings came forward to take up position in a wide circle around the perimetre of the land. From where each one of these Guardians stood, twelve spokes like energy leylines, ran to the centre of the circle.

At this central point sat a little Amazonite crystal skull then currently in my care. This skull Being showed me that he wished to offer himself as an anchor at the hub of the twelve energy lines. I saw him buried deep in the earth, directly under the centre of the Yurt. Amazonite is a stone said to bring harmony to all people; it is a truth maker and peace maker – a perfect stone therefore to hold the energy of a space that was to become a place for retreat, workshops, healing, ceremony, music and fun.

As the vision continued to unfold, the 12 Inter-dimensional Beings communicated that they were the representatives of 12 Star Nations, and that they would be available to those who gathered in that place. It became very clear to me that a powerful Inter-dimensional portal was being opened at Enuma Elish, and that those who visited the Healing Centre in times to come, would have access to communication with these 12 Star Nations.The 12 Guardian representatives I was given to understand, would at all times hold and protect the integrity of the space, allowing only those of the highest intention to enter.

Before we began our ceremony I gifted the Amazonite skull to Wendy and told her of this vision. Her response was a mixture of stunned shock and elation. “In 2004, I made a drawing of exactly what you have described” she said. “I called the drawing the ‘The Council of Twelve’. I was given a message that the council of twelve would be working with me.” With that, she ran off into her workroom and reappeared moments later with the drawing. It was basically an exact representation of my vision, complete with Star Language symbols at each of the twelve points on the wheel. When I placed the Amazonite skull in the centre  of the drawing, it looked like it had been tailor made for it, and had been waiting its arrival! 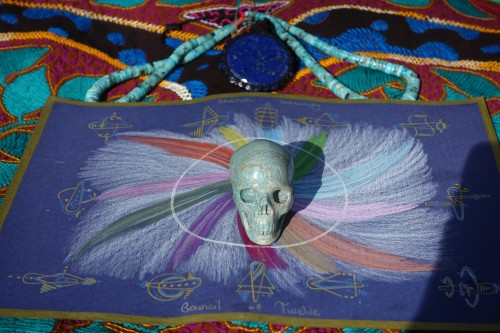 The Amazonite skull sits in the centre of Wendy’s ‘Council of Twelve’ drawing.

On witnessing all of this, Wendy’s husband Johnny then ran inside! He re-emerged with the working drawing of the Yurt itself, which outlined that there were to be twelve poles lodged deep into the ground that would form the circular structure of the building, with one more pole a the centre! We were all in awe of the grace of what was unfolding and in gratitude for this graphic confirmation of our collective vision.

In the knowledge that we were being guided by powerful Beings from other realms, we commenced our ceremony. 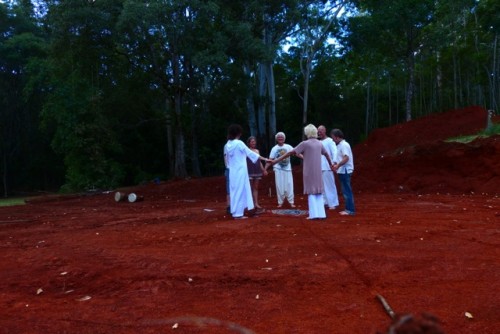 As ‘luck’ would have it one of our group of eight present just happened to be an expert in building sacred geometry structures! With Bob Matthews’ help, the twelve-spoked wheel was etched into the red earth with a stick, and each of the twelve Guardian points established. At the centre we placed the Amazonite crystal skull on my ceremonial Shipibo cloth, surrounded by a few other special crystals. My Source Stone and Wendy’s were there, along with Wendy’s Native American turquoise Jaclas, and my ancient Tibetan Jade bones, thought to be about 5000 years old. 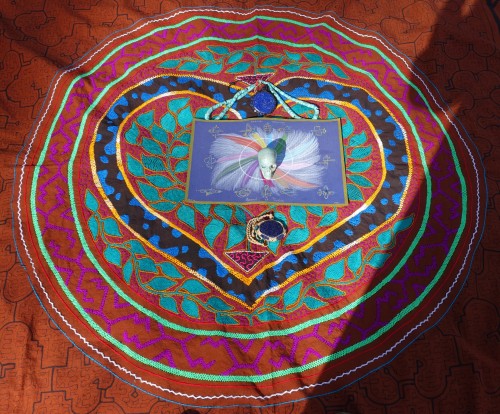 At the conclusion of the ceremony, Wendy placed a Lemurian crystal point at the head of each of the twelve Star Guardian spokes… 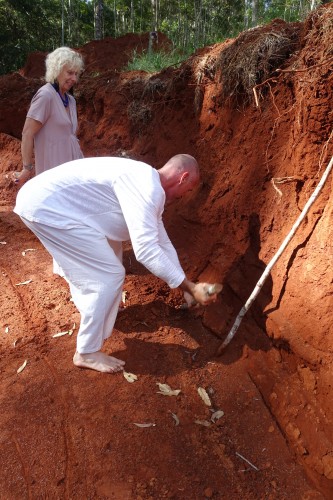 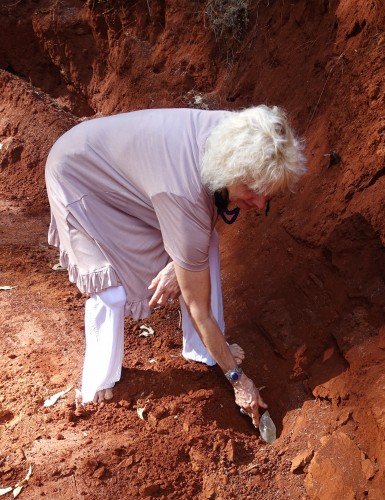 Wendy inserts one of the Guardian crystals into the red earth

She then buried the Amazonite crystal skull deep into the earth at the centre of the wheel. 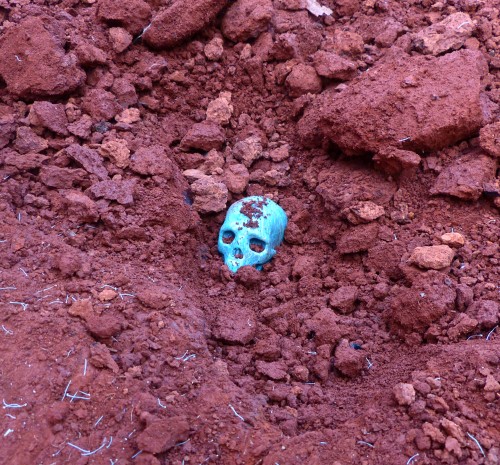 With that, the foundations of the Enuma Elish Stargate Portal were complete.

Within the next few months the Enuma Elish Healing Centre in Ravenshoe will be fully birthed into physical manifestation. Apart from the healing energies and service it will offer the traumatized local community as they recover from the recent tragedy, I believe this will also be a place to which soul travellers from across the globe will travel. The Star Nations will call to them, and when they enter, they will find there a place of rest, rejuvenation, healing and remembrance.

I deeply honour Wendy and Johnny for their commitment to Spirit and for all the heart energy, physical effort and Love they have invested in creating this haven sanctuary, that others will enjoy and become part of in the years ahead.

If you’d like to be kept informed about the opening of the Enuma Elish Centre and the first events to be held there, or if you’d like to book the space to facilitate your own workshop, you can contact Wendy Everett direct on:-