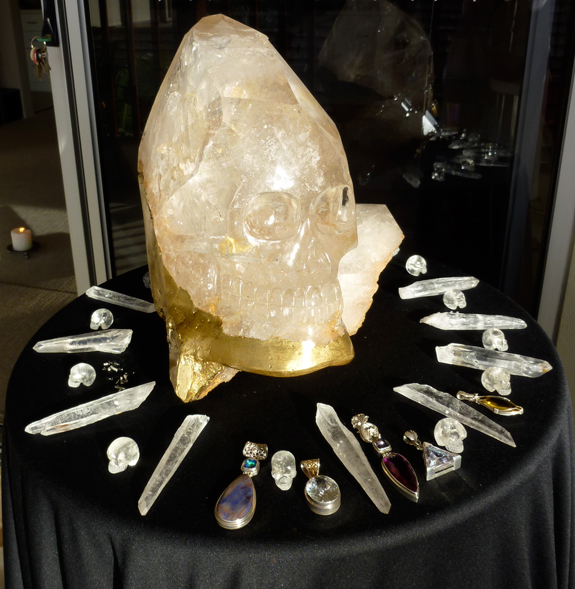 An evening with Lia Scallon and ‘The Master Skull Solar’ 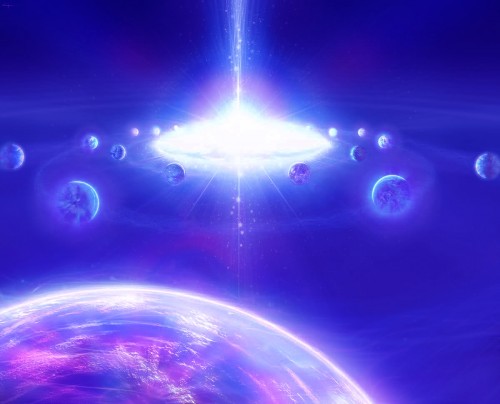 There is movement at the station!

I know I am not alone in feeling that the energy of 2014 thus far has been somewhat challenging. Personally, I have felt as if I’ve been in a kind of ‘holding pattern’…almost a state of limbo, where I seem to have little control or indeed desire, to move or engineer things in the outer physical world.

After the intense and frantic activity of 2013 when I recorded and released a new album, and travelled the country with my ‘Sounds of Source’ Tour, 2014 has thus far demanded something entirely different from me…total surrender. I have become even more acutely aware that we are playing out our part in a very large tapestry and sometimes that calls for inner action, rather than outer action.

We are living in extraordinary times where planetary forces are influencing us more than we know. In the past week – and I believe under direct influence of those very celestial forces – I feel the ‘Sleeping Giant’ has begun to awaken, and that like a butterfly emerging from its chrysalis, we are standing on the brink of a huge transformation.

I hope that some of you can join myself, and ‘The Master Skull Solar’ in Cairns, to harness the unique and powerful planetary energies presenting at this particular time, and that together, we can play our part in the Universal Mystery Play that is unfolding. 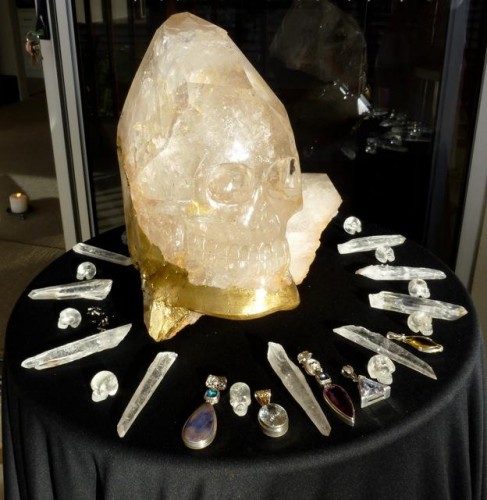 ‘Solar’ has been whispering in my ear over the last few days! He has communicated that he wishes to share his energy at a gathering in Cairns, in tandem with my transmission of the ‘Sacred Sirian Source Codes’ which have proven to be the trigger for deep Soul Activation and Remembrance. The date is now set and the venue booked for April 22nd at the beautiful Seville Conference Centre in Cairns.

It was not really a surprise for me to discover after booking the venue, that we will have very significant planetary assistance for this event! April 22nd heralds the appearance of the extraordinary Lyrids Meteor Shower. Every year in late April, the Earth passes through the dusty tail of Comet Thatcher, and the encounter causes a meteor shower called the Lyrids. This year the shower peaks on Tuesday April 22nd. Forecasters expect 10 to 20 meteors per hour, although outbursts as high as 100 meteors per hour are possible. 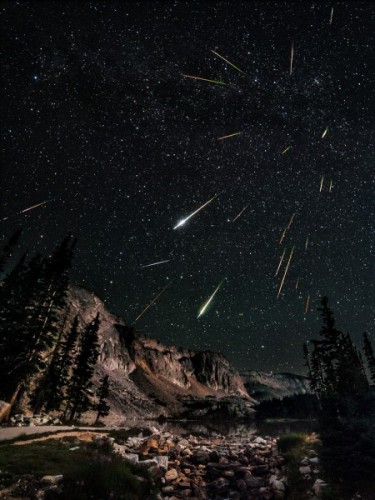 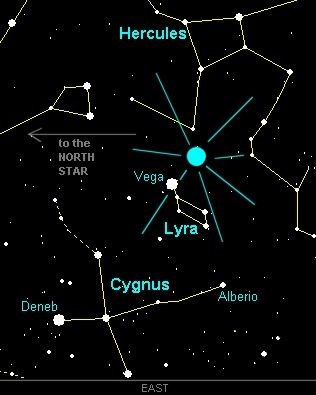 The true source of the shower however, is Comet Thatcher. As the Earth plows through Thatcher’s dusty tail, flakes of comet dust, strike Earth’s atmosphere  and disintegrate as streaks of light. Lyrid meteors are typically as bright as the stars in the Big Dipper, but some are more intense and even brighter than Venus. These “Lyrid fireballs” cast shadows for a split second and leave behind smokey debris trails that linger for minutes.

An impressive outburst was documented in 1803 by a journalist in Richmond, Virginia, who wrote:

“Shooting stars. This electrical phenomenon was observed on Wednesday morning last at Richmond and its vicinity, in a manner that alarmed many, and astonished every person that beheld it. From one until three in the morning, those starry meteors seemed to fall from every point in the heavens, in such numbers as to resemble a shower of sky rockets…”

The Lyrids Meteor Shower is the precusor to another extremely rare astrological event – a once-in-2000 year occurrence. On April 23-24th, four planets  – Pluto, Jupiter, Mars and Uranus, move into exact 900 angles to one another, forming a Grand Cross in our skies. The climax of this Cardinal Grand Cross on the 23-24th April 2014 is sandwiched between two eclipses; a Total Lunar Eclipse on the April 14th, followed by a Solar Eclipse on April 28th. 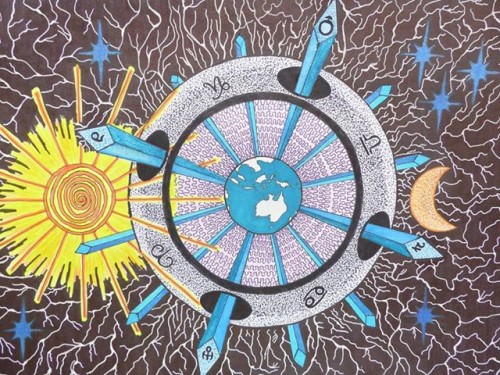 Wendy Everett of Emuma Elish Herbs and Healing, artist of the dramatic visualisation of the Grand Cross above, describes the event thus….

“Our electric universe in our celestial skies present us with the Cardinal Grand Cross, the energy of which is building on planet earth, and throughout the entire cosmic realms right at this time, culminating in the Grand Cross on April 23-24th.

The ‘square’ that is created by this alignment opens a gateway to huge changes, a gateway to lost knowledge, one where fear will be tested in our bodies and our lives. Love will be the the key to this gate. We are seeing, and will see more as this times comes closer, chaos and strange things happening on our earth and in our bodies. Most people are saying the same thing…”I feel like I am expecting something to happen…an anxious feeling”.

It is an awakening time for those who wish to step up to the gate and turn the key. Those who walk in darkness will loose grip of the keys and fall. Be prepared for some amazing earth challenges.  The four planets playing out this cross, bear the four elements of earth, fire, air and water…. a complete mix of alchemy to create a new earth coming.”

‘The Master Skull Solar’ is an inter-dimensional Lemurian Master of great power.   Since coming into my care extraordinary visual phenomena have appeared around ‘Solar’, many of which have been captured in photos. 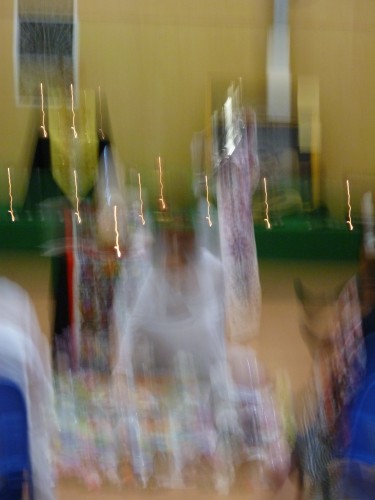 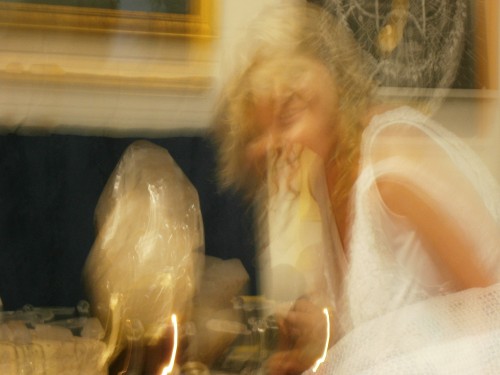 Due to his great size and weight – he is 33 Kilos – ‘Solar’ rarely appears in public. This event in Cairns therefore, is a unique opportunity to meet him in person.

As always, as soon as I receive Guidance to facilitate an event, I am immediately called to begin setting the energies. This time has been no different. Already, I have spent many hours channelling through the Sound frequencies to weave the etheric structure for the sacred space/time we are to enter. With that, a growing sense of the vital importance of this gathering has begun to permeate my being.

What I’m being shown is that the main purpose of this event is ‘RECONNECTION’ …reconnection to our soul’s original blueprint, along with the dismantling of the faulty energetic matrix we have been hooked into. The Sound Codes from Source to come through on the night, will powerfully recalibrate and rewire us. I believe that Spirit has  quite specifically chosen the extraordinary, celestial planetary alignment of the Grand Cross as the optimum time for this alchemical transformation to occur. ‘Solar’s’ presence will give us access to the assistance we need from the higher dimensional realms, to successfully fulfil our soul’s desire in this regard. THIS IS BIG!!!

Both Crystals, meteors are vibrational amplifiers. The Lyrids Meteor Shower, the Grand Cross and the incredible Crystalline presence of ‘The Master Crystal Skull Solar’, will all serve to amplify the transformative ‘Sacred Sirian Source Codes’ transmitted through me on the night, to trigger deep Soul Awakening  and Remembrance, and Reconnection.

A Rare Opportunity to Experience in Person

This will be a nurturing evening of meditation, chant and sacred channelled song, that offers the opportunity for quantum consciousness expansion, amplified by The Lyrids Meteor Shower and the Grand Cardinal Cross gateways.

I would be most appreciative if you could share the poster and flyer for the event below with your friends and social networks, and perhaps post one in your local Community Noticeboard.

For those travelling from outlying regions or Interstate who may want to stay in Cairns overnight, the Conference Centre also offers incredibly cheap accommodation on site, at $55 per night. The ‘Seville’ is located in a tropical setting located at the foot of the Coastal Range. The peaceful environment features beautifully kept grounds with tracts of natural bushland, that provide a tranquil experience for all who step into the environs. To book a room, please contact the Seville Centre manager direct:
Julie Clarkson:    Ph:07 – 4054 6988    Mob: 0417 992062                                                    Email: julie.clarkson@somcairns.com.au

You are warmly invited and encouraged to bring your own personal Crystals and Crystal Skulls, so that they too may receive the energies of the ‘Sacred Sirian Source Codes’ and ‘Solar’s’ presence. Many people attending past events, have reported amazing physical changes occurring within their crystals as well as themselves!

“Lia, I attended your Crystal Skull workshop on Good Friday. I had my, completely clear quartz crystal pendulum in my handbag that morning, which since then has filled with wonderful striations. It looks like it has a spider web inside and it feels like it has woken up! I have asked the pendulum to encode all my crystals at home, so they are currently all sitting happily together ‘waking up’ . This was a ‘coming home’ experience for me. Amazing! Thank you for opening us to the skull energy.”
Di Clarke 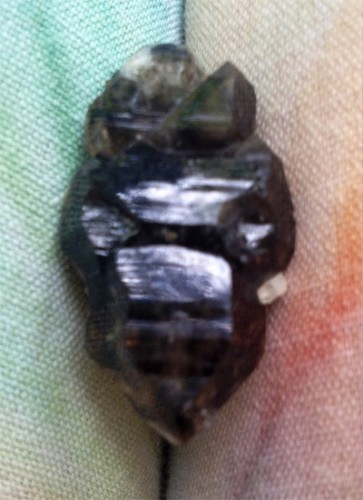 Can you see the deep wide-set eyes, the nose and the mouth? 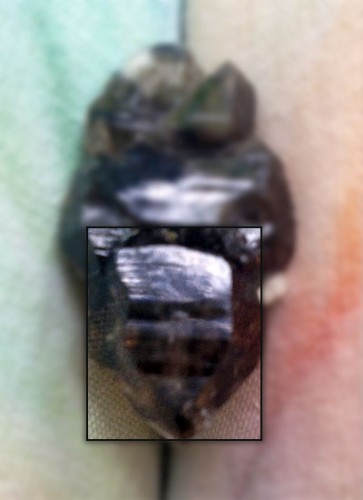 And inside the larger skull,  is another ancient looking, Crystal Being

At the 12.12.12  ‘Solar’ event in Cairns, the cosmic energies of Source were captured forever in stone on the night. Kristina and Graham of ‘The Closet Hippy’ in Malanda who had brought a very large generator crystal to adorn Solar’s altar, were dumbstuck to find that their crystal had been imprinted with a giant heart during the ceremonies! 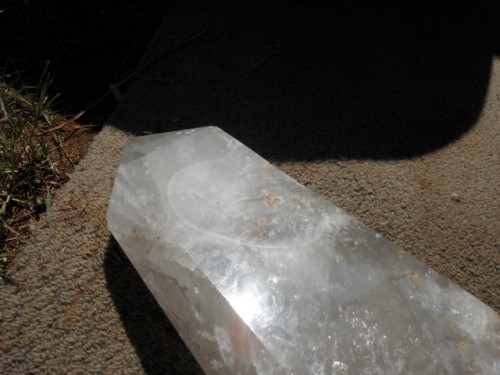 Are you a Crystal Skull Caretaker?

If you are feeling the call to become a Crystal Skull caretaker, a group of beautiful Crystal Skull Beings that have been with me for the past year, are now, with great anticipation, awaiting their new Guardians! 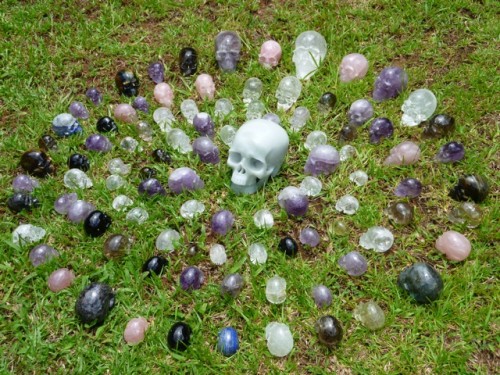 These particular Crystalline Beings have remained with me longer than usual! As a result, they have spent a lot of time with ‘Solar’ on his altar and engaged in many ceremonies in my healing space, as well as being present at the Sounds of Source FNQ events in 2013. These skulls therefore carry incredible energy forth with them, to enrich the lives of their new caretakers.   Crystal Skulls – Visit Online  Store

Along with your crystals, you are also invited to bring a flower for the Altar

As always, I hope this finds you well and happy.

‘Solar’ and I very much look forward to seeing some of you in Carins on April 22nd! Till then…

May the gifts of Self-Love, Joy and the realization of your own Divinity, reveal themselves to you from deep within, now that we have entered the New Age of Wisdom. Let us make a vow to ourselves and to each other, to embrace all that we are, and all that we are becoming.

Wishing you as always,
Much Love and many Blessings,
Lia