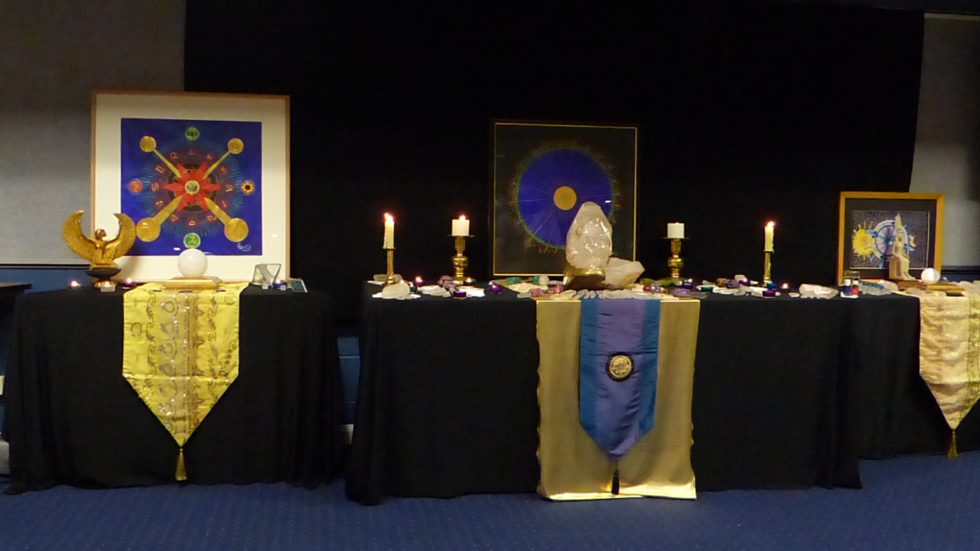 A Sacred Night of Nights 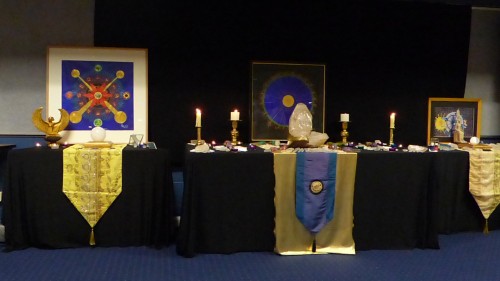 What a joy it was to see such dedicated commitment to the path of Light displayed by so many last week in Cairns. People journeyed from as far away as Melbourne, NSW, Airlie Beach and Ravenshoe to avail of the powerful energies flooding through the unique Gateway opened by the Cardinal Grand Cross, the Lyrids meteor Shower and the two eclipses that topped and tailed those rare planetary events.

Much Love, creativity and intention was poured into the preparation for the event, with the best part of two days being spent in the physical set-up alone, and for several weeks in advance, I was working and channelling every day, weaving the etheric, energetic structure around the space  in which we would sit.  This preparation was supplemented most beautifully by the support of the ‘Lemurian Seed Team’ who arrived at 2.30pm on the day of the event, to create the stunning crystal mandalas that would help anchor the energies in each of the four Cardinal directions.

Apart from the Lemurian Seed Crystals themselves which were lovingly offered in service by their custondian Liz Ferris, each mandala featured a number of special sacred ceremonial pieces and healing tools provided by myself. Each Cardinal point corner had a designated Crystal skull Guardian, one of the SOS ~ Master Source Stones, and a powerful copper and quartz pyramid generator.  The conscious purpose of these mandalas was  to encase the room in a crystalline grid of protection, while at the same time creating an amplifying vortex that would act as a chalice for the energies  being downloaded through the Grand Cross Gateway.

Chery Goodsell from Airlie Beach and Kylie O’Hanlon from Melbourne worked on this beautiful mandala below, which incorporated a reminder of the 4 Squaring planets of the Grand Cross and the 4 Cardinal Directions. My Rose Quartz skull ‘Rose’ acted as guardian in this corner. 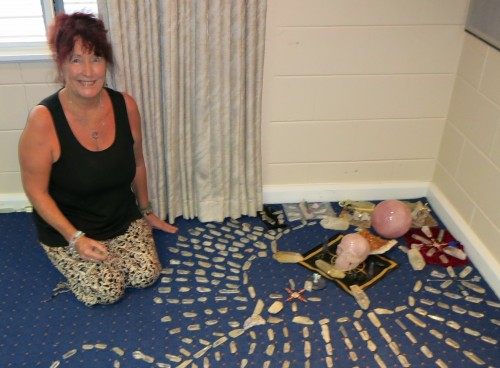 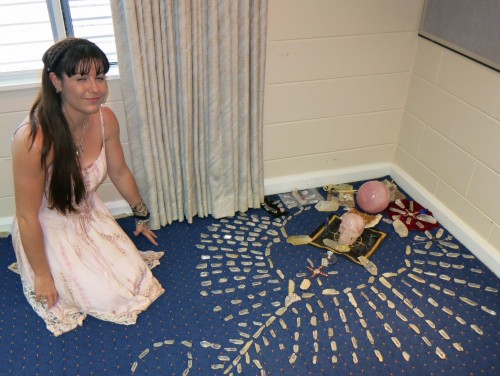 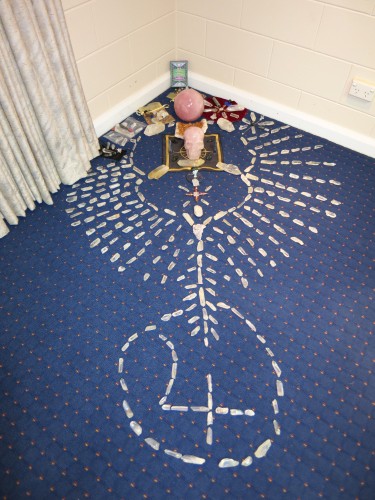 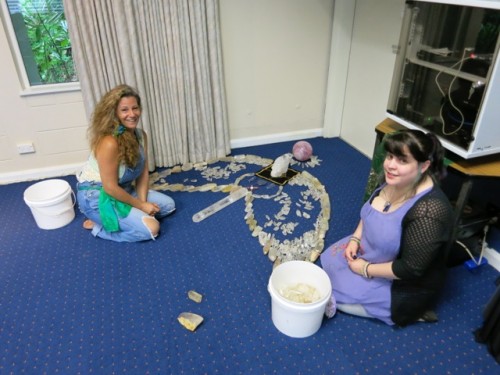 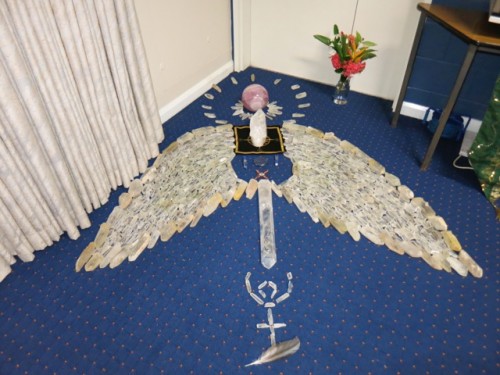 Khristina from Julatten and Kylie from Melbourne are seen here with the stunning heart mandala featuring my skull ‘Sorrow-Sitara’ (also carved by Leandro De Souza) and the Egyptian Anhk which symbolises the Key to Spiritual awakening and expanded consciousness. 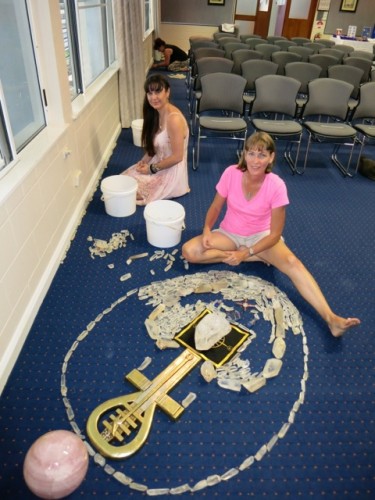 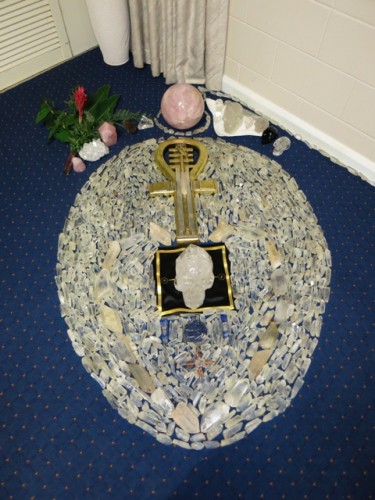 Mary Schell from Raelston, NSW and Josh Goldstein from Melbourne worked in the fourth corner, to create this elegant mandala, within which my Turquoise crystal skull ‘Siegmund’ sat as guardian. 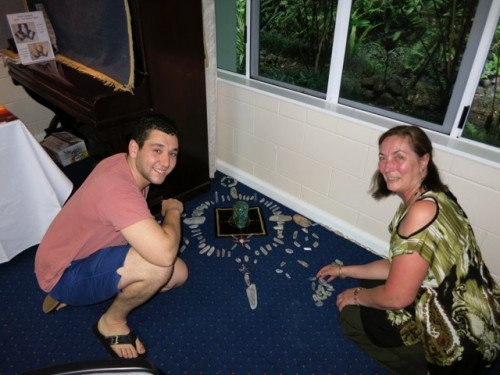 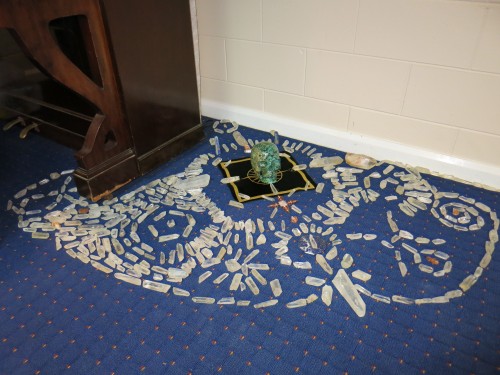 The altars looked absolutely beautiful too!

Sacred Mandala artist Clive Walters from Tolga, brought his stunning new artwork – a representation of the squaring of the Cardinal Grand Cross – to adorn one of the side altars… 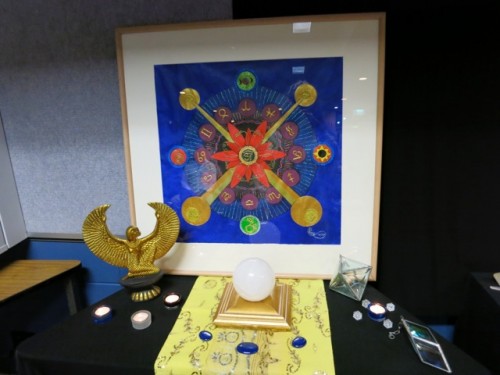 Wendy Everett of Ravenshoe who is rapidly growing in skill as an artist, also brought her dynamic portrayal of the Grand Cross, which seemed tailor made as a backdrop for the Lion-headed statue of Sekmet. 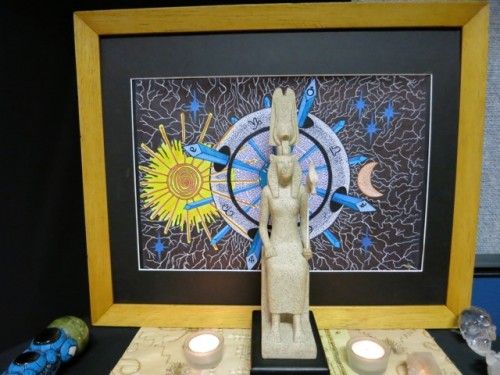 On the main Altar, Solar sat with his ‘crowning’ glory’ – a magnificent Indigo and fiery gold representation of the Great Central Sun – gifted to him last year by Clive Walters. 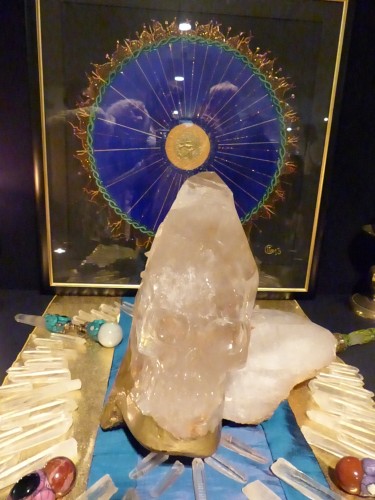 During the ceremonial part of the evening, after being cleansed with the high frequency oils of Sage, Rosemary and Frankincense, and having been administered the vibrational essence of  ‘Solar Radiance’, each participant received an individual activation. A central part of this activation was the formation of a ‘triangulation’ of energy with ‘Solar’ and Lia. It was a most powerful process. 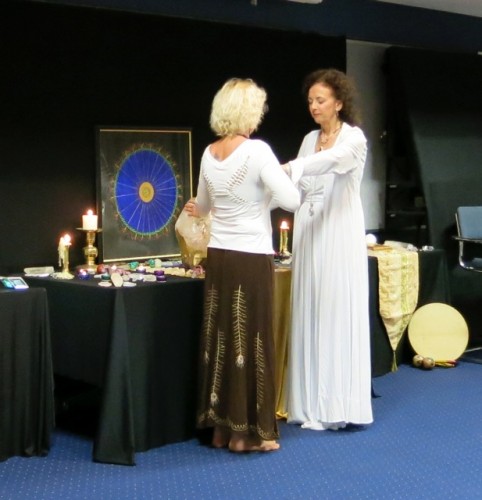 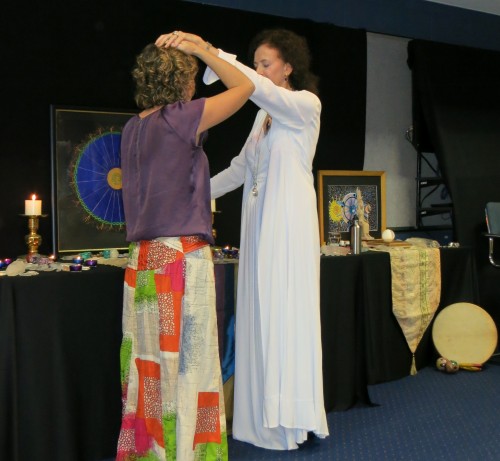 It seems that when ‘Solar’ is present or when the ‘Sounds of Source’ are being transmitted, some pretty amazing things can happen in people’s cameras! This shot below taken by Wendy Everett while I was transmitting the sacred sound codes, demonstrates the amount of Universal Light being downloaded upon all present.

“This is a special feature on my camera that when there is brilliance such as point of light it will pick it up. It does not happen to all photos taken with this filter. This is amazing the amount of light it has picked up on in this photo. An Amazing night!”

Wendy also captured a huge orb between Clive Walters and myself during the activation ceremony! 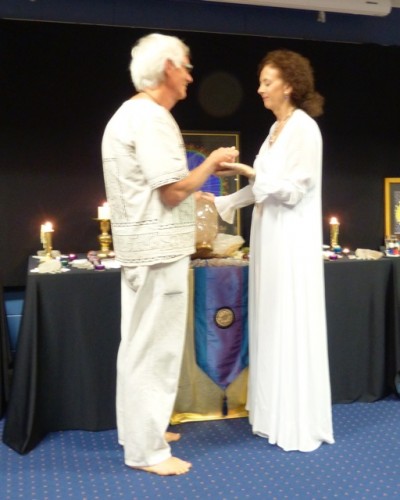 It truly was an beautiful and sacred night – a union of Soul Family who came together to willingly and bravely open their hearts to release the pain and suffering of the past, in order to fully embrace the freedom, self-healing and empowerment that their souls so deeply desire.

What took place for us all that night can be explained no more eloquently I think, than in the words of the participants themselves. I received so many beautiful messages from people who wished to share their experiences, as the energies continued to integrate and settle into their being during the days following the event. Their words speak of the enormous support that surrounds us from the other realms….support that is always there for us, if we but take the time to go within to receive it….

“Lia, what a wonderful and beautiful evening it was – the ceremonial sacredness of the whole experience. Actually I think it started from the moment I arrived because when I went to my room (I stayed at the Centre) it felt like my room was filled with energies. I felt tired from the drive so I lay down to have a rest. It was like I was in a dream but I was awake at the same time and then all of a sudden I was surrounded by the Ascended Masters and ‘Solar’ was there too. They were saying how happy they were to see me and that I had come…it was amazing! When I came out of the dream tears were rolling down my face, I felt all this excitement about what was about to occur.

It felt like something very special happened that night – it definitely did for me. The energy of ‘Solar’ was so full of unconditional love, forgiveness and acceptance. For me it felt like the whole room was filled to the brim with compassion. I truly felt it at a very deep level, the sense of ‘Oneness’ of it all…of everyone who was there. I so resonated with what you talked about too. I feel like I am still there in that room and it’s like I don’t want this feeling and the experience of the whole night to ever go away, to ever end.

To watch you when you were at the altar doing what you were doing, was amazing. It was like you became ‘other worldly’ – actually the whole room felt ‘other worldly’….I didn’t feel as though I was really there! It was like I was somewhere else – like maybe I’d gone home for a while. At the end I just couldn’t say anything…I just wanted to savour it all.

Thank you to you Lia and to ‘Solar’, and whoever that being is that comes through him. Like I said before, he truly is a ‘Grand Master of the Highest Order’ and I have such a knowing of him.”

“Lia, I have been to a few of your evenings but this was the deepest I have ever gone. From the time I walked in the door, I felt I was in a deep, deep meditation, I found it difficult to keep my eyes open, but heard and felt everything. The energy was amazing! Thankyou Lia for what you do. I have had great shifts from the evening and feel very blessed. Many I spoke to feel the same way. In love and much Gratitude…”

“Lia, what a week it has been. Many blessings to you and much heart felt thanks for holding this magical event so that we could all experience what we did. I have had a little time to reflect and would like to share with you some of the changes I have noticed and felt so far.

Most of the ceremony I spent in a altered state and it seemed as though there was a influx of pure energy coming in through my crown and activating the pineal glad area (it was so bright and pure). When you were singing round the room it seemed  as though your voice was multidimensional, piercing and stirring the soul on a very deep level.

The next day seemed to be full of emotion – releases from the throat chakra and heart, in realisation of how blocked we have been as a species, and that how lucky I am to have the courage to step out and venture into what I call ‘unchartered waters’. I have been deeply moved in ways that cannot be explained.

On the way home in the plane, I experienced lots of emotion. I cried when I took off, but then had a vision of yourself and ‘Solar’ comforting me and advising that you are always with me in spirit, which moved me very deeply. I was taken back to the temple meditation with ‘Solar’, during which I was advised that deeper levels of my heart chakra were being awakened.

Lia I truly can’t explain in words my full experiences over the last few days – there aren’t enough words on this earth plane to describe it. Nor can I find the words to express my thanks to you, for this experience.  Till we meet again…many Blessings.”

(Kylie recounted several other remarkable experiences and profoundly affecting interactions with people since the event).

“I was there and I bear witness to the “Lightness” present during the evening, which is carried within each of our hearts and beaming out into our surrounds wherever we are now. Thank you Lia for facilitating, and thank you all for being there and experiencing the common-unity of souls.”

“It was a powerful night – the energy was amazing. I went very deep and on a definite out-of-body journey with the meditation! Thank you Lia!”

“Dear Lia, thank you for another amazing evening. I could feel the powerful energy connection from above and at times, with strong heat flashes, so maybe it was a cleansing? I love all the wisdom you share. I have been feeling the letting go as well, and riding the wave of faith and hope. We took so long to leave because Kala was busy at the altar communing with Solar energies!”

(Kala is Annie’s beautiful 10 year-old daughter who has been to several events).

“Lia, there are no words to thank you for what you give to us each and every time. Such love and beauty cannot be described by mere words of this, our language. I hope you know that your purpose is so needed, and so very much appreciated as you deliver it all with so much love. I wanted to share this passage from ‘The Keys of Enoch’ with you. These words jumped out to share with you as they describe your gift to the world, which is just so precious and so very much needed at this time…

“The energy words are to be used to code your body directly into the light. They also provide the sound vibrations of greeting and protection. To place these ancient energy words into English, modern Indo-European languages or some other language, would deprive consciousness of a direct experience with the power of the sacred language. Transposing these words would cause them to lose their energy pulse, which is similar to the symphonic song of a musical masterpiece transposed out of its original key into a strange cacophony.”

‘Solar’ looked extremely happy with the proceedings too – look at that smile! 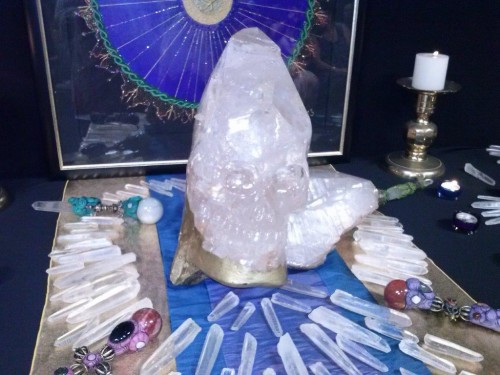 Thank you again one and all…all those who were present physically  on the night, as well as those who joined our Circle of Light from a distance. Know that you make a difference….that together we make a difference. Together we are creating the bridge to the New Earth we all dream of and so desire. It is but a breath away. We have worked very hard and we are tired, but perhaps all that is required now is that we trust our Higher Selves  implicitly, and allow those loving Guardians from other realms – like ‘Solar’ – help us make that final Quantum Leap.