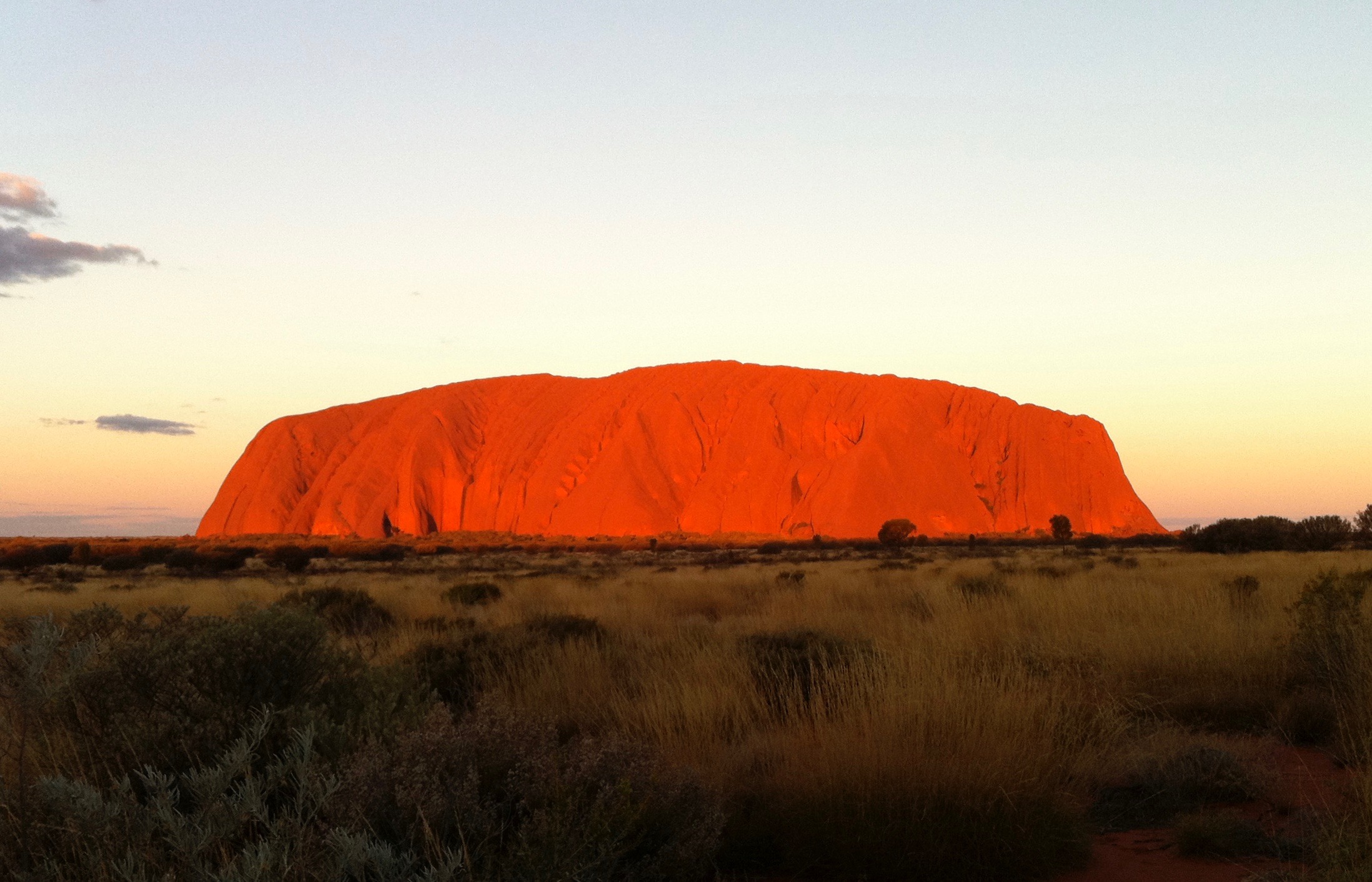 A Date with Destiny
Uluru, December 21st 2020
By Lia Scallon

What I suspect most of humanity craves more than anything else right now is Hope…a light at the end of the tunnel. Help may be at hand…

A couple of months ago I received some startling information about an ancient Aboriginal Prophecy.The Prophecy speaks of a Pleiadean spaceship that came to Earth eons ago, leaving behind a special device to be activated at a predestined time. The Aboriginal Elders call this device the ‘Magic Box’. Informed Aboriginal sources say that the activation will take place at Uluru at 9.02pm on December 21st 2020, (N Territory time) at the exact moment of the Great Conjunction of Jupiter and Saturn on the Summer Solstice.

In order for the ‘Magic Box’ to be activated, a critical mass of people with pure, positive intent is needed. The box will absorb the powerful reservoir of human energy and distribute it through the ley lines and Dreaming tracks of Planet Earth. Five sacred sites in Australia will light up first, followed by one in New Zealand, creating the Rainbow Bridge, followed by all the other sacred sites throughout the world.

The following message (abridged)  came to us, direct from the Uluru Elders:

I have been instructed to provide clarity about the specific shared intention for the Ceremony on the 21st December 2020. These words are directly from the Original People, the Lore keepers.

Ten years ago, I was told in person about this from an Aunty directly involved in the Ceremony: it’s purpose, the specific intention and the exact date and time. They have prepared for this Ceremony their whole lives, for many, many generations.

The purpose of the ceremony is for the Rainbow Serpent to become the Rainbow Bridge; to rise up to connect with the Sun and to go straight into the heart of Mother Earth: cleansing, energising and reinvigorating her and ushering in a new era of consciousness for Mother and her children.

To be clear ~ the focus is on Mother Earth, not on ourselves. With cleansed body, mind, heart and soul, the intention is to energise the heart of Mother Earth with our love and energy.

You can contribute to the energy of the Ceremony from wherever you are. You do not need to be at Uluru. As long as the energy and intent are there at 9.02pm on the 21st December, it shouldn’t matter how it gets there.

If this Ceremony is supported by enough pure love, energy, and shared  intention, it will be successful.”

The Elders request that we prepare with daily cleansing of body, mind and soul, using pure water or smoke, before meditating, to cleanse all negativity. 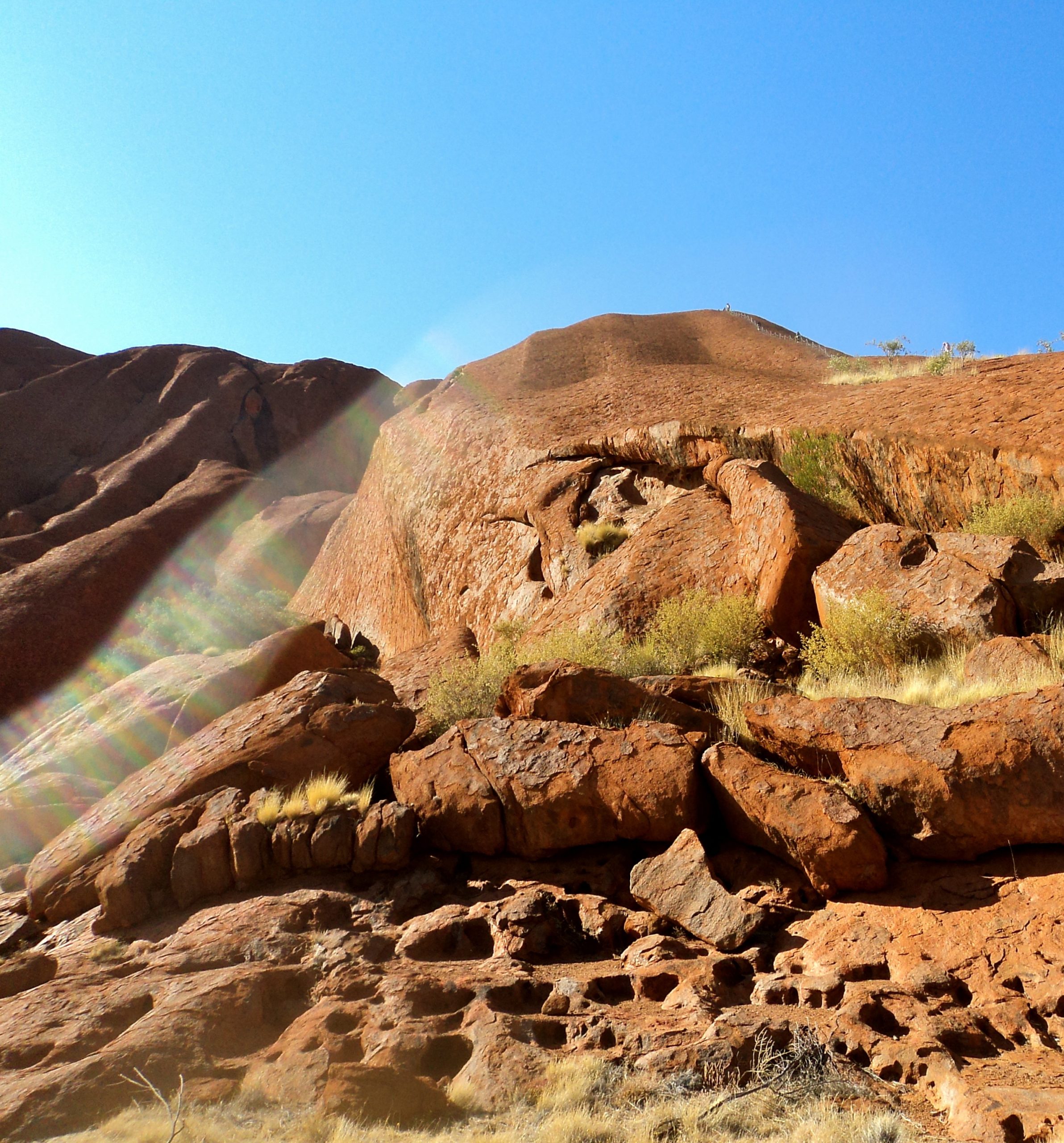 Could the Prophecy really be true?
Aboriginal Elder Auntie Minnie Mace says that in 1948, we moved into the Age of Aquarius. Since then the Universe has been in ‘shunting’ mode. On December 21st, 2020, she says the Universe will move out of shunt mode and begin to breathe in, as we move into the new 13,000-year cycle.

Many aspects of my personal journey dovetail into the December 21st event. In February 2012, a chance meeting in Kuranda triggered a 4-month shamanic journey relating to what I came to know as ‘The Australian Crystal Skull’. This journey was peppered with so many extraordinary synchronicities, and people appearing on my path to deliver the next piece of information, that I was left in awe at the intricacy of the Divine Plan.

An Aboriginal warrior guide was with me daily, observing and protecting me, during these deep shamanic experiences, one of which connects directly to the Prophecy. In this vision, I found myself at Uluru, deep beneath the Rock itself, where I sat within a ceremonial circle of Aboriginal Grandmothers. In the centre, was ‘The Australian Crystal Skull’. The experience was so real that as I write this eight years later, I am transported there once again.

In June 2012, I was urgently ‘told’ to cancel a planned trip to Hawaii for the rare Venus Transit, and to undertake a solo pilgrimage to Uluru instead. What ensued was life-changing. After a challenging first night, when watching the sun rise over the great monolith next morning, I fell and broke my wrist. I knew immediately this was an initiation to test my commitment.

Although I felt very alone and vulnerable, I remained committed. The rewards were great. I was privileged to do private ceremony with a resident Elder, who gifted me ochres from Uluru for use in my own ceremonies. My days there were full of confirmation of the shamanic experiences I’d undergone over the previous months. 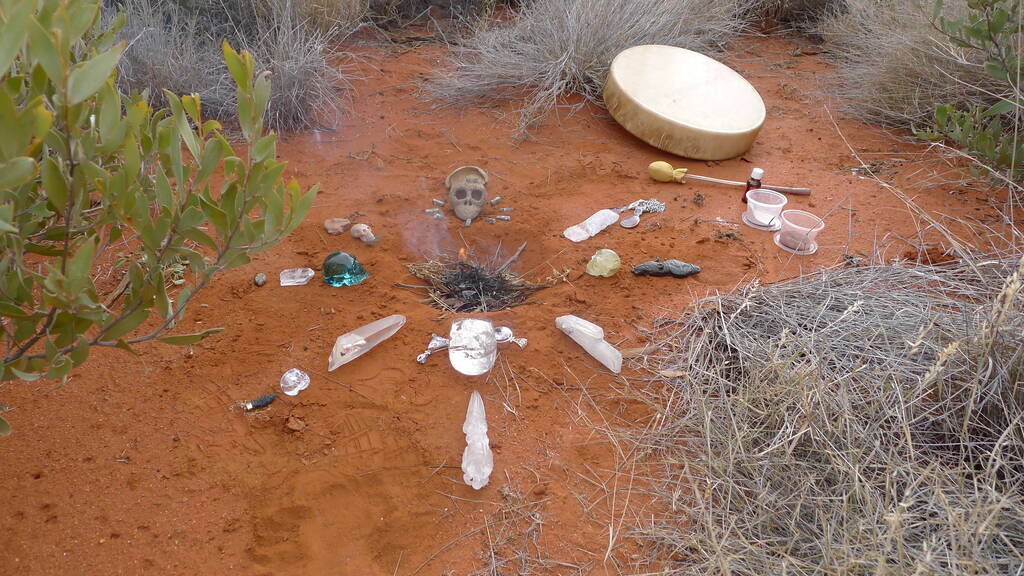 On the final evening, I made my way to a chosen power spot. There, I sang to Uluru from the deepest recesses of my heart. Amplified and echoing through the great caverns and crevices of the Rock, my song soared out into the cosmos. In that sacred moment, I felt like I was the only human being on Planet Earth, and in full and joyful connection with my Starry Family.

Before leaving Uluru the next day, I hid a beautiful, clear quartz, crystal skull in a cave in one of the Rock’s crevices – my gift of Love and acknowledgement to ‘The Australian Crystal Skull’ which I believed resided underneath Uluru, awaiting activation at a predestined time.

Just one week later in Mt Shasta, California, another of the world’s potent power nodes, I became the caretaker of

The Master Crystal Skull Solar  in a dramatic soul reunion. 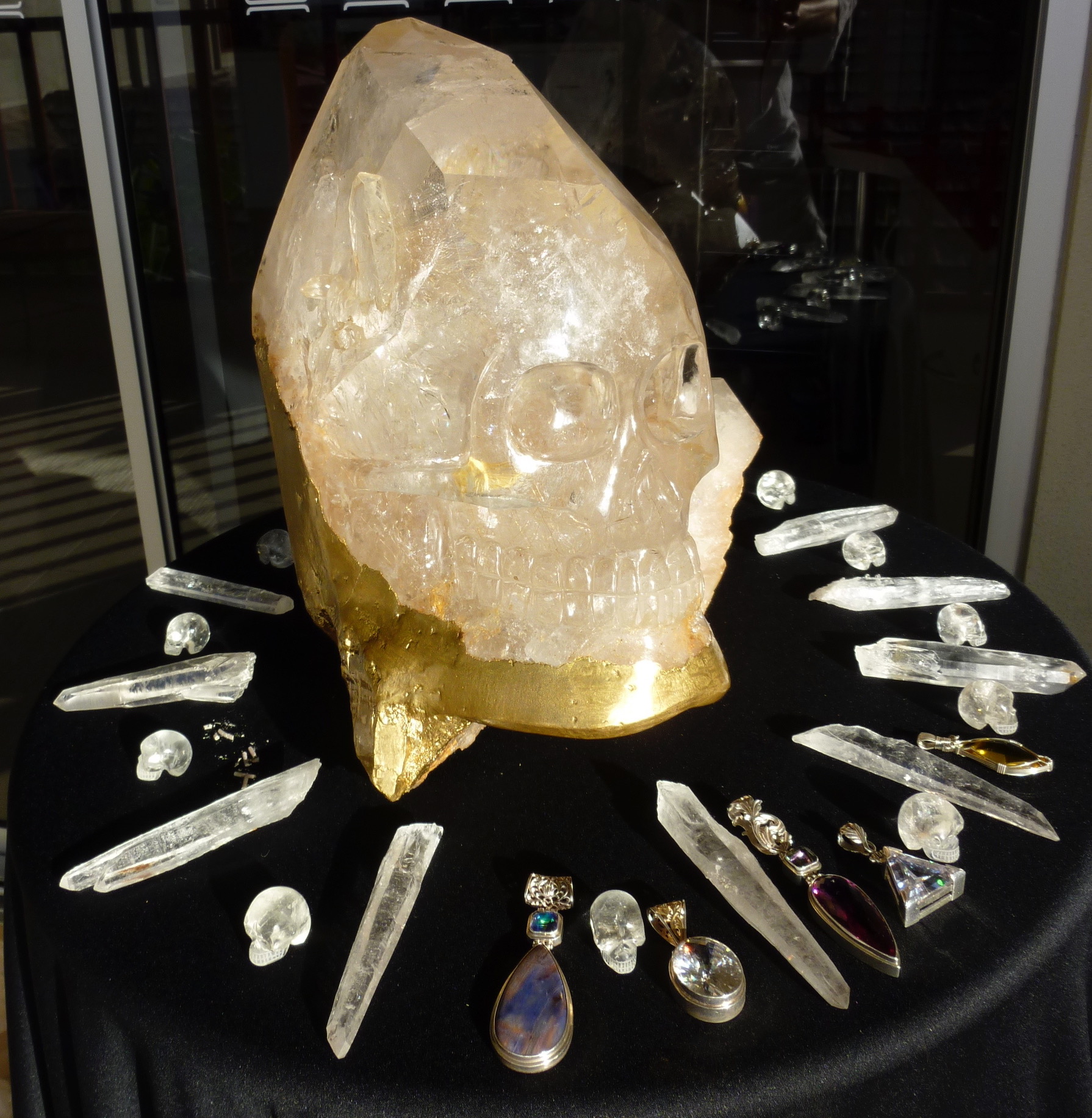 Solar has since proven himself to be an extraordinary, inter-dimensional gateway. On his arrival in Australia, my journey with Solar became deeply entwined with that of ‘The Australian Crystal Skull’ which, in a complex and otherworldly unfolding, did manifest physically. I had the honour of spending time with the skull now known as ‘Rainbow Serpent’. I share this as it relates to the December 2020 Prophecy.

‘The Australian Crystal Skull’
Two days after I learnt about the ‘Magic Box’, I was contacted by ‘Rainbow Serpent’s’ custodian. She told me that the skull now rests ‘in the belly of the Serpent’, a cave at Uluru. Three years ago, an Aboriginal man turned up at her door, introducing himself as ‘The Invisible Man’. He said he had come for the skull. This woman always felt the skull belonged at Uluru, so she handed it to the man without question. Eight months later she received photos from the Elders, showing the cave now filled with rainbow orbs. 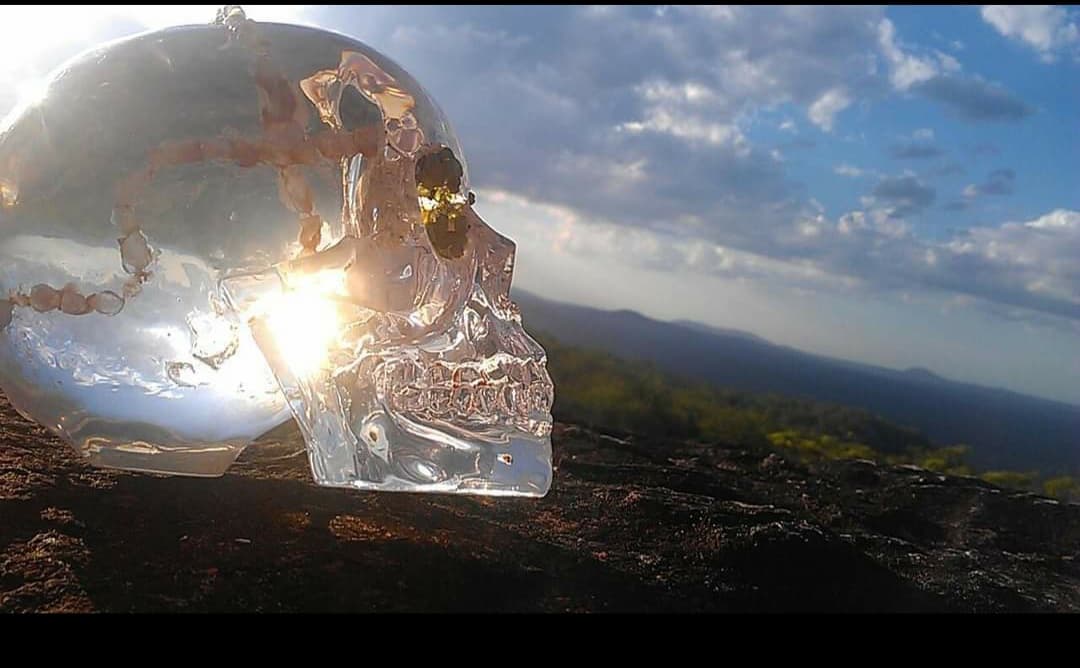 My shamanic experience of eight years ago,
when I sat with the skull in the circle of Uluru Grandmothers,
has it seems, become reality.

Why now?
In June 2020, three months before I knew about the Aboriginal Prophecy, I began recording a new album called ‘Return of the Star Elders’. As it was only weeks since I had launched another album, I felt the need to consult my Guides about a suitable release date. Their response was immediate: “December 21st – the Solstice.”

What is extraordinary is that the story behind the music is almost identical to that of the Prophecy. The album unfolds the story of the return to Earth by the Star Elders, who seeded the Planet eons ago.

In another powerful overlapping of events, in August, just days before I heard about the Prophecy, I recorded the ‘Aboriginal’ track with renowned, didgeridoo player David Hudson. We had no prior knowledge of how timely this creation would become, but the day was laced with a powerful mixture of joy and gravitas.

Are the remarkable synchronicities between the new music, Uluru, and the Aboriginal Prophecy mere happenstance? I don’t think so. I believe the new album has been orchestrated by the Star Elders, and that it contains Light Coded messages to prepare us for the influx of new Cosmic frequencies, and support us during the adjustment to the ‘Great Shift’.

The Ark of the Covenant
Information about the Prophecy keeps coming. The latest, a personal email with an intriguing theory comparing the ‘Magic Box’ to the ‘Ark of the Covenant’, was echoed by an unrelated source, two hours later.

“The Ark of the Covenant which is a similar type of ‘box’ contained higher dimensional energies that had remarkable powers on the planet…the device they are talking about would be comparable to the Ark of the Covenant. However, this particular one is really activated by consciousness, so unless you have higher consciousness, the device does not operate…the idea is that the feminine healing energy must be brought down and transmitted throughout the planet, to bring a new healing light based on the Divine Feminine.”
Arcturian ‘Juliano’ – through David Miller

Will Anything Really Happen?
Although no-one can know for sure that the ‘Magic Box’ will be activated, or that we’ll see physical evidence if it is, many ancient prophecies speak of a time when our Star Ancestors will return to awaken humanity from slumber.

Could the seismic change in our world today herald that return? Could the Uluru Ceremony on December 21st 2020 be a pivotal moment in our transition to the New Golden Age?

Regardless of how it may manifest, let’s send a tidal wave of pure Love to Uluru, knowing in our hearts that we will make a difference.

Lia Scallon
For the past 20 years, award-winning composer and songstress Lia Scallon has been transforming lives with her unique, Light Language songs. Lia’s otherworldly vocals transport the listener to an inner sanctuary of utter peace and calm. Described as mystical, magical, and transcendent, the main purpose of Lia’s music is to offer comfort and healing. These are songs to soothe the soul.

Another purpose of these Galactic frequencies is the reactivation of the Earth’s Crystalline Grid. In her role as code bearer, Lia has journeyed to many of the planet’s ancient power portals, to help amplify their energetic vibration with her sacred songs at this time of ‘Awakening’.