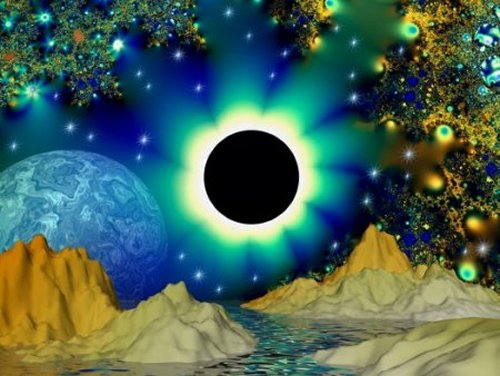 Solar Eclipses always herald change, helping to waken up areas of our life that have become stagnant. It’s like the cosmos is shaking things up to get us to see things from a new perspective, so that we can release behaviours and relationships that no longer serve our growth. James Tyberon of Earthkeeper.com offers some interesting insights into the current astronomical climate. He describes the 2018 Mega Eclipse Triad as ‘The Triple Tsunami’…

“The complete astronomical landscape is amplified by the Eclipse Tsunami beginning in early July thru Mid August. This ‘ Eclipical Sandwich’, two Solar’s surrounding a Total Lunar Eclipse occurs as a rare triple sequence, a ‘Tsunamai Triad’ of three sequential eclipses, one every 2 weeks for a six-seven week phase of July & August 2018.

The Total Lunar Eclipse will be the longest eclipse of this century. This will be an intense phase, but also a time of great clarity, rare vision opportunity in the energy of the August 11th Solar eclipse.

All Eclipses have a 14 day wing-span of influence, seven days prior to and seven days after the actual eclipse apex. The effects of each of the 3 eclipses forming the energetic Triad, will exceptionally merge, amalgamate with their individual aspects and the astro-environ of planetary-angle-gravity imprints. A solar eclipse always occurs on a new moon, however the eclipse ads a powerful energy influx, feeling like a full moon x 10. A lunar eclipse always occurs on a full moon.

There are considerable astronomical telluric transitional challenges that humanity must contend with in the present phase. You are in a time of extremes, of Crucible Astrology, in which all unresolved issues are surfacing, by design, as a cleansing process. And there are myriad physical and psychological anomalies that you are currently having to manage and adjust. In both July & August 75%, 6 of the 8 other orbiting planets in your solar system are in retrograde.

This gravitation pattern can influence a marked increase in melancholy, apathy & depression. All of you should make a concerted effort to remain active, upbeat & compassionate during these timings between mid July and the end of August….

This phase of 2018 will be a time in which shadow is revealed, and ‘Pandora’s Box’ is figuratively open. It is a timing rife for polarization, riots, scandal, political upheaval, even assignations….

Travel to conflicted areas, including the Middle East & parts of Europe should be very cautiously & carefully considered, especially avoiding potential hot-spots of terrorism & conflict during late July to 19 August, in which Mercury, Mars & Saturn are all in powerful angles of retrograde.

We tell you specifically that in 2018, these ‘cometesque’ crystalline forces contain divinely imprinted codes of a unique transitional Akash (life force units) which is designed to trigger the bio shift of humanity.”
Earthkeeper.com

We are certainly under the pump at the moment. Whilst inside this Eclipse corridor, we are likely to experience increased conflict, tension and the triggering of deep Karma issues. The flip side is that we may also be blessed with unexpected revelations and insights. The key to navigating this period will be to maintain constant awareness of our responses, think before we act, and strive for balance in each moment in the face of the challenges. If we can do that, armed with the knowledge that we are not alone in this cauldron of intensity, and that the cosmos is presenting us with an opportunity for personal transformation, we have the potential to make a quantum leap in our emotional and spiritual growth. Wishing you safe passage through the storm!